Cruise tourism – amusement at the expense of the environment, people and the sea

In the 1960s and 1970s, as more and more transatlantic travellers began opting for planes instead of ships, the passenger-ship industry had to find a new business concept to attract people back to their ships. US-ship owners looked to their fellow countrymen’s appetites for gambling and leisure. These were the formula for success in Las Vegas. Why wouldn’t ships be able to function as a combination hotel, bar and ­casino? The idea paid off beyond all expectation. Blackjack, poker and duty-free shopping attracted people to the sea in droves, and since the 1990s, cruise tourism has become the foundation for the fastest-growing travel sector worldwide. According to the Cruise Lines International Association (CLIA), international participation in cruise tourism in­creased during the period from 1990 to 2018 from 3.8 million to 28.5 million passengers, half of them from North America and one-quarter each from Europe and the rest of the world. The growth continued until the outbreak of the corona pandemic in 2020, when the number of passengers fell to around seven million.
Up to that time, according to the German Environment Agency, there were over 500 cruise ships in operation worldwide, the largest of which could carry more than 6000 passengers and 2200 crew members. These floating cities are still operating today, primarily in the Caribbean and the Mediterranean Seas. But the traffic on secondary routes in Asia, Europe and the polar regions had also increased significantly by 2020, so that experts now speak of a global branch of industry. In 2018, the cruise-ship branch employed 1.18 million people and generated a total aggregate value of USD 150 billion.

The largest share of cruise-line income is reaped by three corporate groups: the Norwegian Cruise Line Holdings, the Royal Caribbean Group, and the Carnival Corporation & plc. Together they control 77 per cent of the market. The tourism profit chain has been perfected by these three companies to such an extent that the coastal resort locations the ships visit hardly profit from mass tourism any more. The passengers only spend a short time on land. For the most part they eat, drink, shop and relax on board, even though, in most cases, the cities they call on, or nations in the case of island states, have financed the expansions of ports and supply facilities that made it possible for the ships to dock there in the first place.
Only the cities that serve as departure and destination ports still profit to a meaningful extent from the ship passengers, but even here the ship companies have taken over the cruise terminals as well as taxi and bus lines that bring the tourists to the ship at the beginning of the trip and back to the train station or airport at the end. In the Caribbean, ship companies have even bought entire islands so that they can offer shore excursions while taking in 100 per cent of the resulting profits.

The destination cities and, above all, the environment pay a heavy price for the expansion of the cruise-ship industry. The most severe consequences include:

Several years ago, the United States Environmental Protection Agency estimated that every day on board a cruise ship with more than 3000 beds, around 80,000 litres of wastewater, one tonne of garbage, more than 640,000 litres of greywater, around 24,200 litres of oil-polluted bilge water, more than eleven kilograms of batteries, fluorescent lights and medical waste, as well as four plastic water bottles per passenger are produced. With this in mind, and considering that about 70 per cent of the ports visited by cruise ships lie in regions with especially high marine species diversity, the potential damage from improper disposal of this garbage and effluent is very evident.
The industry is reacting to the environmental protection requirements of the IMO and to criticism from scientists and environmentalists with technical innovations. Lower-emission fuels (especially LNG), exhaust filters, wastewater treatment and waste incineration systems, the elimination of disposable tableware, and a shore power supply ­dur­ing port stops are supposed to improve the environmental balance of mass tourism at sea. However, experts seriously doubt that this type of business can truly be carried out sustainably. After all, the ships are bringing countless thousands of people to places that are often no ­longer able to cope with such a large influx of visitors. This is not only true for small Caribbean islands, but also for large tourist cities like Venice, Barcelona and Palma de Mallorca. And if a destination loses its appeal, perhaps because the coral reefs have died or the island is ­covered with tourist garbage, the caravan of cruise ships moves on to find a new, as yet untarnished dream destination.
Working conditions on the ships are also often criticized. Most of the employees have only short-term contracts and many work for low wages. When ships were immobilized around the world because of the corona pandemic, many of the workers were not allowed to travel back to their home countries. They were trapped on the ships without pay and with no bargaining power.
The extent to which this industry will be able to recover from the loss of passengers due to the corona pandemic remains to be seen. Some market specialists are predicting a possible end to the golden era, while others see a good chance of a renaissance. The question of whether mass tourism at sea continues to have a future ultimately depends on millions of customers who want to pursue their dream of a sea voyage, while giving little or no thought to the social, ecological and economic footprint that cruise tourism leaves behind. 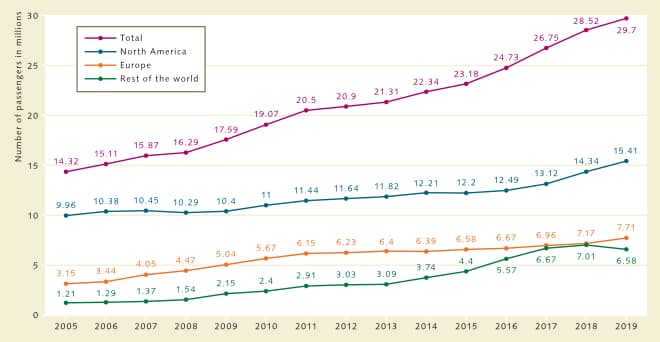 fig. 4.21 > Until the outbreak of the corona pandemic, the cruise-line branch was reporting new passenger records every year. Around half of the holidaymakers came from North America, a quarter from Europe and another quarter from the rest of the world.