How do CRISPR-Cas9 genetic scissors work?

Programmable genome editing using CRISPR-Cas9 genetic scissors is a new molecular biological method allowing scientists to sever any DNA strand at a very specific point and, in the course of the subsequent repair, cut out, exchange or even insert individual DNA building blocks and thus rewrite individual genes.
CRISPR stands for “Clustered Regularly Interspaced Short Palindromic Repeats” and refers to sections of DNA repeats. The genetic scissors were developed by Emmanuelle Charpentier and Jennifer Doudna, two molecular biologists who were awarded the Nobel Prize for Chemistry in 2020 for their work on this technology.
The basic CRISPR-Cas mechanism originates from bacteria. It serves there as a kind of immune system, allowing the bacteria to recognize and fight off hostile viruses on the basis of previously stored DNA fragments. Scientists have now found ways to make use of this fascinating mechanism. In order to localize the site where the double strand is to be cut, the scientists provide the cutting protein Cas9 with a selected ­target sequence known as guide RNA. The protein then searches the double-stranded DNA for exactly this sequence. When it reaches the target sequence, in other words the cleavage site, it docks at the ­double-strand and cuts it.

Once Cas9 has cut the double strand of DNA, the cell’s natural repair programme kicks in and rejoins the severed ends. This repair can be random (non-homologous) or targeted (homologous). In the case of non-homologous repair, individual DNA building blocks are removed or incorrectly assembled at the cleavage site. As a result, the gene in ­question can no longer be read correctly and is therefore no longer active. In homologous repair, a new gene segment or a short new DNA sequence can be inserted at the cleavage site and the gene function can thus be altered.
Both the guide RNA and the cutting protein Cas9 are produced synthetically and then introduced into a cell. Compared to other genome editing methods, the CRISPR-Cas9 genetic scissors are easier, faster and more cost-effective to use. This method is also far more precise than others: unintentional cuts in the DNA strand are rare and can largely be ruled out. Moreover, CRISPR-Cas9 can be used to make several changes to the genome simultaneously. 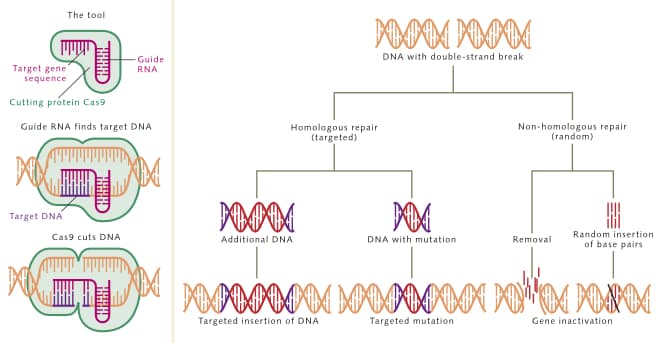 7.4 > The CRISPR-Cas9 genetic scissors are a molecular biological method for cutting and modifying DNA with pinpoint accuracy. The method can be used to insert, remove or modify individual DNA building blocks. It works with all organisms and is used in animal and plant breeding as well as in biotechnology.