More than 75 years have passed since the end of the Second World War. However, there is one legacy of the war that still affects the seas and oceans and has now become a serious environmental problem. Even today, millions of tonnes of explosives and chemical weapons from the second and first world wars are still rusting away on the sea floor.
A small percentage of them are the result of actual combat operations in which marine areas were mined, or during actions in which torpedoes, aerial bombs or anti-aircraft shells sank to the sea floor un­exploded. The vast majority of munitions, however, were intentionally dumped into the sea, at first by the German military who wanted to be sure during their retreat that their unused chemical weapons did not fall into the hands of the eventual victors. Later, when it was considered crucial to disarm Germany as quickly as possible at the end of the war, the allies sank shiploads of German munitions in selected dumping areas of the North and Baltic Seas.
Up until the 1960s, dumping into the sea was considered a safe and inexpensive way to dispose of munitions. For this reason, the British and US militaries also continued to discard their own outdated war materials in the sea during the post-war years. The British chose Beaufort’s Dyke for this purpose, a 250-metre-deep trench between Scotland and ­Northern Ireland, which experts estimate now contains over a million tonnes of munitions. The Americans, on the other hand, dumped their remaining munitions in the waters off Hawaii, Nova Scotia, Newfoundland, and probably at other sites as well.
Researchers are rarely able to access these kinds of records abroad because of military security restrictions. They now know, however, that there are a great number of additional munition-contaminated marine areas around the world, including the Mediterranean and Black Seas, the west coast of the USA, the Gulf of Mexico, the east and west coasts of Australia, and around Japan. According to present knowledge, there are 1.6 million tonnes of munitions resting on the seabed in the dumping areas of the North and Baltic Seas alone.

Rusting munitions in the sea represent a worldwide threat for humans and marine inhabitants because they pose two kinds of danger. The first is that explosive ordnance can still detonate, for example, when mines are dis­turbed by bottom-fishing nets or when construction work for wind farms is initiated without prior examination of the sea floor for old munitions.
The explosion of a sea mine would trigger a shock wave that would kill all of the marine creatures in the close vicinity and shred the blood vessels and alveoli of whales, seals and other marine mammals over a greater distance. Divers and ships’ crews would also be exposed to extreme danger, which is why the seabed has to be examined for explosive munitions prior to any construction being carried out in German waters. If munitions are found that can be moved, they are raised and placed on board a ship, transported to land and destroyed there. If lifting the ordnance safely is not possible, the munitions are carefully placed in a hoisting bag and towed to one of the dumping areas in the Baltic Sea where construction work is prohibited. In this case, permanent destruction is not an option, because there is currently no known procedure for neutralizing explosive ordnance in the sea in an environmentally acceptable way. In the North Sea, however, highly explosive munitions are sometimes towed to sandbanks that are above water at low tide. During low-water stands they can then be detonated without causing great harm in the sea.
The second danger to the environment is chemical in nature. Both explosive and chemical weapons contain various components that are increasingly leaking into the water due to the ongoing decay of the metal munition coverings, eventually dissolving in the water, and being distributed throughout the ocean by marine currents. Trinitrotoluene (TNT), the substance contained in explosives, for example, breaks down into as many as 50 different reaction products known as metabolites. The two most commonly occurring TNT metabolites, like their parent material, have been proven to cause cancer and have already been detected in mussels and the organs of fish in dumping areas of the Baltic Sea. The meat of the fish, however, was not significantly contaminated.
In 2018, when researchers from Kiel studied water samples taken from various regions of the German Baltic Sea, they found traces of TNT or its metabolites in every one of the approximately 1000 samples, because the substance first begins to metabolise in the sea and the process toward complete degradation proceeds very slowly. The long-term effects that the compounds used in explosives are having on biological communities of the North and Baltic Seas, and the concentrations at which they will cause demonstrable damage are now being studied by the researchers in various projects. So far, they have only been able to record notably high concentrations of TNT in the waters directly in the dumping areas.
Chemical munitions were dumped in barrels as well as in the form of bombs and grenades. Most of them contained nerve gases like tabun and phosgene, or the skin-damaging mustard gas. Tabun and phosgene degrade relatively rapidly in sea water. As a liquid, however, mustard gas goes through a process known as the coconut effect. It forms a hard crust and is encapsulated inside. If an angler happens to find one of ­these nuts and comes into contact with the liquid core, the carcinogenic chemical will still cause the same severe skin burns today that it did more than 100 years ago.

The longer the munitions lie in the sea, the further their casings continue to rust. They are thus becoming increasingly difficult to handle, and more and more of their contents are dissolving in the water. Because of this growing environmental threat, scientists are calling for the creation of long-term monitoring programmes for the piles of munitions in the dumping areas. These include:


In recent years, the researchers have employed and refined a number of methods for mapping the sea floor. Through a combination of photo­graphy, multibeam echosounding and magnetic mapping, scientists can now produce impressively high-resolution images of the seabed in which mines, weapons boxes or torpedoes can be easily distinguished from rocks or other natural objects. Similar progress is being made in the development of rapid analysis methods. With the help of mobile mass spectrometers, scientists can now detect TNT and other compounds typical of explosives.
In the next step, German experts, along with many partners, want to develop technical methods for the safe and ecologically responsible clean-up of the munitions-contaminated areas directly at sea. The idea is to raise the munitions and load them onto a pontoon. Robots there would cut open the shells and remove all the chemical contents. The metal remains could be recycled and the chemicals would be thermally treated. The scientists want to have an initial prototype of this kind of system built and tested by the year 2025.
Scientists will soon make all the relevant data from international research on old munitions in the sea available online in a map-based information portal named AmuCad.org. The system uses artificial intelligence and other data-analysis approaches to identify regions with particularly high potential for risk. Using a colour-coded traffic-light system, decision-makers will be able to better identify marine areas where munitions are decaying especially rapidly, as well as zones with large quantities of munitions that are being used more intensively by humans. In both cases, it would be advisable to establish monitoring programmes and make plans for the removal of explosive ordnance. 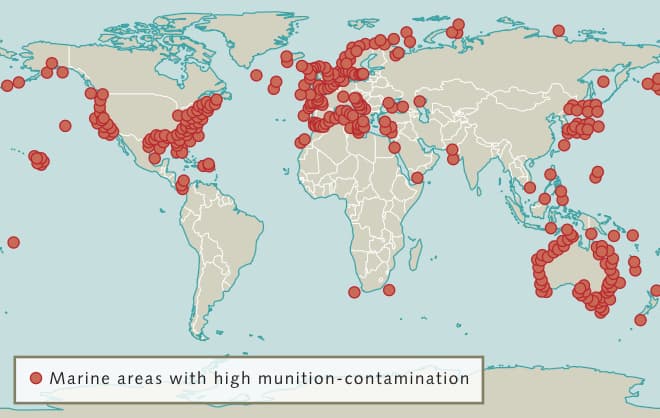 fig. 6.19 > Ocean scrap yards in the form of dumped munitions are a global problem. Particularly former combatants such as the USA, Japan, Great ­Britain and Australia have dumped old stockpiles into the ocean and are now having to deal with the consequences.