The ocean is acidifying

The ocean not only stores heat, it also removes the greenhouse gas ­carbon dioxide from the atmosphere. Since the beginning of the industrial era the world’s oceans have absorbed 25 per cent of the carbon dioxide emissions produced by humans, with grave consequences for the ­chemistry of the ocean. When carbon dioxide from the atmosphere is dissolved in seawater, there is a chemical change in the surface water. Its pH value sinks and the water becomes more acidic.
Seawater normally has an average pH value of 8.2 and therefore tends to be slightly basic. This is due to mineral components in the water, particularly calcium carbonates in the form of calcite or aragonite, which at some point were dissolved by weathering from rocks on land and then washed into the sea. But when the ocean absorbs carbon dioxide (from the atmosphere or because marine organisms release it as a product of respiration), it is not simply dissolved in the water like oxygen is. On the contrary, a portion of the carbon dioxide reacts with the water to form carbonic acid. This in turn breaks down into bicarbonates, which are the salts of carbonic acid, and protons (also known as hydrogen ions). The latter drive up the acid concentration of the water, and the ocean becomes more acidic.

The measure for the concentration of hydrogen ions in a solution is called the pH value. This numerical value, however, expresses the concentration as a negative decadic logarithm. This means that the more hydrogen ions there are in a solution, the smaller the pH value is. The mean pH value of the ocean surface has sunk from 8.2 to 8.1 since the year 1860. This seemingly small step reflects an actual increase of acidity concentration on the logarithmic scale of about 26 per cent – a change that the world ocean and its inhabitants have not experienced in millions of years. The acidity signal now extends down to a depth of as much as 2000 metres. If humans continue to emit the same levels of carbon dioxide as they have in the past, the pH value of the oceans can be expected to decrease by an additional 0.3 to 0.4 units by the year 2100, whereby the seawater would become 100 to 150 per cent more acidic. This does not mean that the oceans are actually acidic because even at values of 7.7 they would still be basic by the chemical defini­tion. However, relatively speaking, they would be more acidic than before.
The amount of carbon dioxide that accumulates in seawater depends, among other things, on the water temperature (gases dissolve easier in cold water), factors that reduce the salinity of the water (low-salinity water acidifies more quickly), and the oxygen consumption. For example, many organisms that consume large amounts of oxygen and release correspondingly large amounts of carbon dioxide live in the eutrophic coastal zones. Added to this, when coastal waters become warmer, their biological communities are subjected to three kinds of pressure – by the warming itself, a reduction in oxygen, and acidification. Since only a few species are able to cope with this combined sea change, scientists refer to it as the “deadly trio” with regard to the consequences of climate change for the ocean. 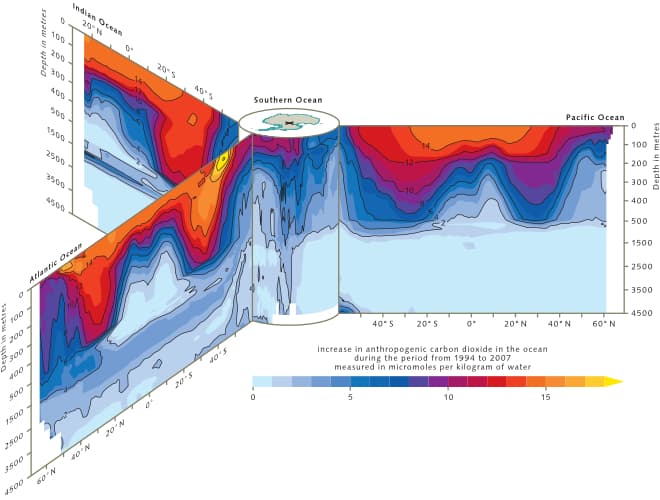 Abb. 2.22 > During the period from 1994 to 2007, the world ocean absorbed an average of 31 per cent of the carbon dioxide released by human ­activities and transported it to considerable depths. The different amounts taken up by the large ocean basins are shown in this figure. The black lines indicate a stepwise decrease in CO2 concentration by two micromoles of carbon dioxide per kilogram of water.