Every year in June, scientists from the US National Oceanic and Atmospheric Administration (NOAA) publish a prediction of the size of the dead zone that will form in the northern part of the Gulf of Mexico ­during the summer. Dead zones refer informally to near-coastal marine areas where the water is hypoxic. These are areas where the oxygen content is so low that fish and other breathing aquatic organisms ­experience respiratory distress and are forced to greatly reduce their meta­bolism or, if that is not possible, to migrate or to die. Exactly when this point is reached differs from species to species. Scientists simply use guideline values, and they even express them in different units depending on whether they are referring to coastal waters or zones in the open ocean. As a rule, water masses are con­sidered to be hypoxic when they contain less than 70 micromoles of oxygen per kilogram of water. And if the concentration sinks below 20 micromoles, they are referred to as minimum zones with extremely low oxygen content. Hypoxic zones usually occur where rivers supply excessive amounts of minerals and nutrients to coastal waters, thus promoting the growth of unicellular and multicellular algae (phytoplankton). This often results in harmful algal blooms. When the algae die, their remains sink to the deeper water layers. There, they are decomposed by microbes that consume more oxygen in the process than can be replaced by freshwater, currents, or wind and waves (mixing with surface waters). At the same time, however, the microbes release large amounts of carbon dioxide, which lowers the pH value of the deep water. This results in even worse living conditions for marine organisms in this zone.

A problem caused on land

Humankind is primarily responsible for the excess nutrient input. The world’s human population has almost tripled since 1950. Accordingly, the pressure on farmers to produce enough food has increased. Globally, farmers today use ten times more fertiliser (mainly nitrogen and phosphorus) than they did 50 years ago. A considerable amount of that is washed by rain into the sea. This is often joined by untreated waste-water from cities and municipalities. As a result of this water pollution, the nutrient load in coastal waters has increased so greatly that the number of hypoxic zones doubled during the period from 1960 to 2007. There are now more than 500 worldwide. They can be found almost everywhere: in the Gulf of Mexico and the Baltic Sea, in the East China Sea, along the British coast, and in Australia. In the USA alone there are now 300 areas where the oxygen concentration falls below the critical guideline value for fish of 70 micromoles per kilogram of water. Many of these are located in shallow coastal areas (less than 100 metres of water depth), particularly where there are relatively weak ­currents. This allows the water masses to remain in place for a relatively long time. Under these conditions, not only do algae grow very well in the summer, but a very warm and stable surface layer forms, making it difficult for oxygen to penetrate to the deep water. The only things that will break through this stable layer are storms that can stir up and ­thoroughly mix the coastal waters. In the summer of 2019, for example, Hurricane Barry prevented the formation of an anticipated record-­breaking dead zone. But scientists now know that the ventilating effect of a storm does not persist for very long. In most cases the conditions under which the coastal waters were losing oxygen return within one week. And the warmer the air and the sea are, the earlier in the year these conditions are established, and the longer the hypoxic zones prevail. Climate change thus facilitates the formation of these zones. 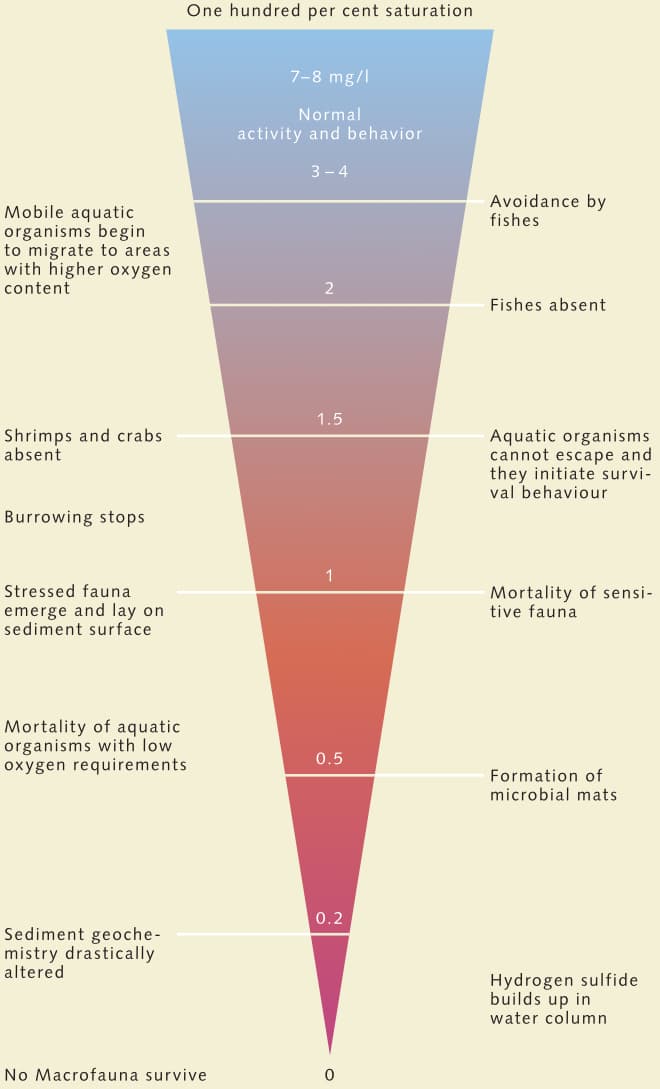 fig. 2.18 > The availability of oxygen determines species diversity and which life forms are viable in a body of water. Coastal researchers calculate the oxygen concentration in milligrams per litre of water and now know at what thresholds higher life forms begin to gradually disappear.

Proportionally small with a large effect

Comparing the oxygen losses in the open ocean related to temperature and circulation with those in coastal waters, the latter are hardly significant in quantitative terms. Their proportion is so small, in fact, that they are practically negligible in the climate-ocean models of the global oxygen budget of the oceans. The consequences of the coastal dead zones for the marine ecosystems and for humans, however, are certainly very serious. Mobile organisms, such as schools of fish, migrate away or change their behaviour, while sessile bottom dwellers grow more slowly or die. Large segments of the entire food web collapse, at least until the end of the summer. Aquatic life as we know it is hardly viable under these conditions. Scientific studies also point to long-term changes. In the affected coastal regions, species diversity and total biomass are declining, and species compositions are changing as well. These developments are particularly detrimental to fisheries. Many measures are necessary to stop the depletion of oxygen in coastal regions. Most important is a reduction of nutrient input. To achieve this goal, agriculture and livestock farming along waterways must be transformed. Wetlands and mangrove forests, which filter out organic particles before they reach the sea, have to be restored. Only properly treated wastewater should be discharged. This kind of coordinated package of measures has proven to be effective in the coastal areas of north-western Europe, among others. According to the OSPAR Commission, there are now fewer oxygen-poor zones there than there were in the period from 2001 to 2005.

The oxygen content of the ocean is reported in different units by scientists from different fields of study. Oceanographers and chemists refer to the amount of oxygen in micromoles per kilogram of water, while biologists and coastal researchers give the value in milligrams per litre of water. To convert between the two units the following formula can be applied: 1 milligram of oxygen per litre of water is approximately equal to 30 micromoles of oxygen per kilogram of water.