Natural gas in the sea floor occurs not only in the gas phase but also, and presumably much more abundantly, as gas hydrates, which are in solid form. Gas hydrates are composed mostly of frozen water molecules that form a solid crystal lattice. At first glance they therefore look just like ice. But unlike ice, there are one or more gases trapped within the crystal lattice of a gas hydrate. In many cases this gas is methane, but also nitrogen, carbon dioxide, hydrogen sulphide, ethane or propane may be present.
Gas hydrates therefore represent a highly concentrated form of natural gases. Roughly 160 to 180 cubic metres of methane gas can be obtained from one cubic metre of methane hydrate, which is why methane hydrates have been seen as an attractive potential energy resource for decades. Scientific studies suggest that there are between 100 and 1000 trillion cubic metres of methane gas in the form of hydrates in the sea floors of the shelf seas and continental margins. This amount would theoretically be sufficient to cover the current gas consumption of the world (2019: 4.088 trillion cubic metres) for at least another 24 years.
Realistically, however, only a comparatively small proportion of these deposits could actually be recovered because gas hydrates only form on the continental margins at water depths greater than around 300 metres. The reasons for this are twofold: For one, only on the continental margins does organic material settle from the upper water layers onto the bottom in sufficient amounts for microbes living in the sea floor to break it down and produce methane on a large scale. For another, only below a water depth of 300 metres is the pressure high enough that the gases gene­rated in the sediments can combine with pore waters to form hydrates that remain stable. If the temperature on the sea floor changes or if the pressure decreases, the crystal lattice of the water molecules will break down and the trapped gases will escape. This physical process is known as dissociation, and it explains why it is possible to set fire to methane hydrates. The fire from a match first melts the ice and then ignites the escaping gas. 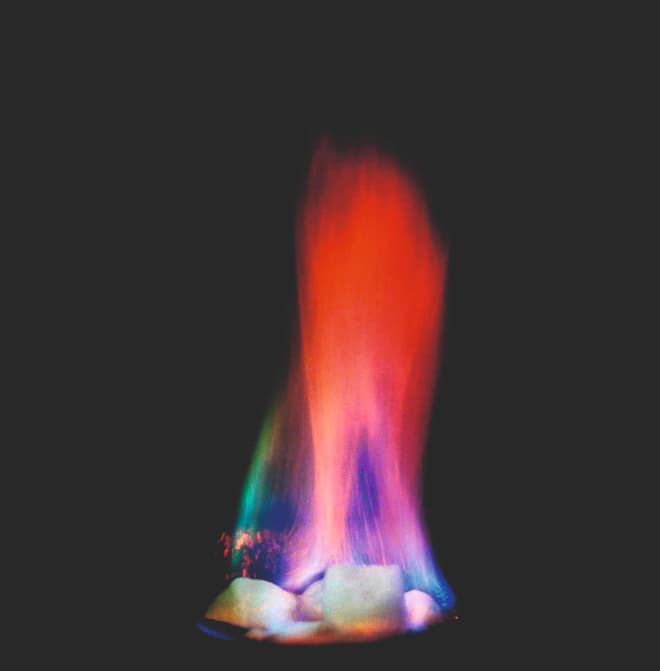 5.22 > When methane hydrates are brought up from the sea floor, they break down at atmospheric pressure. The methane released can then be easily ignited.

The extraction of methane hydrates has been technically possible for some time now. Japanese, US and European researchers have already developed and field-tested working methods. Their test results, however, were somewhat sobering. Compared to traditional natural gas production, it took far too much time for the drilled gas hydrates at depth to dissociate and for the escaping gas to rise through the pipeline. Considering the high investment costs projected by the tests, many experts concluded that industrial production is uneconomical. Nevertheless, Japan and China in particular are continuing to look at the development of new mining methods. If less expensive methods can be developed, Japan, for example, would be able to exploit the gas-hydrate deposits in its territorial waters and reduce its dependence on imported liquified natural gas. The experts working on it, however, have not yet achieved a decisive breakthrough. With the current world market prices for natural gas, extracting methane hydrates today would still be a losing proposition.

5.23 > Methane hydrates occur worldwide, especially on the continental slopes. The largest deposits are presumed to lie off Peru and the ­Arabian Peninsula. The figure illustrates only those hydrates in which the methane was produced by microorganisms. It does not include ­methane in the deeper sediment layers generated by the chemical transformation of biomass.