Energy from the sea – technologies promoted by the European Union

Offshore wind turbines are not the only kind of technology that can be used to obtain green energy from the sea. There is a wide range of other types of emission-free energy technology in this category that are at various stages of development, but which, in the long term, certainly have potential applications at the local, regional or even global levels. In its offshore energy strategy, the European Commission is considering the following technologies for marine energy:

Electricity plants powered by water currents and tides are presently among the most technologically advanced concepts for the production of energy from the sea. They use the motions of water-mass flow from tides or other natural marine currents to produce electricity.
For tidal power plants of the dam-construction type, marine basins are separated from the open sea by a dyke. Large ducts with turbines are installed in the dykes, through which the rising or falling water flows. Electricity is produced each time this happens. The principle works in both directions, but requires especially high tidal ranges that are found only on a few coasts of the world. Because the damming of bays and estuaries is very costly and has extensive environmental impacts, only a few dam-type tidal power plants have been constructed. These include a 240-megawatt plant in France and a 254-megawatt facility in South Korea. The construction of more power plants of this type is unlikely. Experts are now focussing on marine current power plants, in which ­large rotor turbines attached to a mast or cable are positioned in the current.
Modern current turbines are similar to the rotors of wind turbines and can now produce up to 1.5 megawatts of power. The largest marine current power plant in the world to date is the MeyGen project in northern Scotland. Its first four underwater rotors officially started operation in April 2018 and now reliably and predictably generate electricity for 2600 households. Other water-current power plants are presently under construction; the total global installed capacity is to surpass the one-gigawatt mark by the year 2025. Theoretically, however, many times more than that would be possible. Experts believe that as much as 1200 terawatts could be generated with current and tidal power plants. At present, however, the costs for this type of electricity generation are still too high.

Up to 29,500 terawatt-hours per year could theoretically be generated using wave-energy power plants, with the greatest potential in the high-wind regions of the temperate latitudes in both hemispheres (30 to 60 degrees latitude). A few technologies have been trialled, but so far none of them have been fully convincing. Experimental systems have typically consisted of a device floating on the surface of the sea that is anchored to the sea floor and produces electricity by rising and falling with the waves. Pilot systems now installed worldwide have a total capacity of 2.5 megawatts. As the technology advances, however, experts believe that wave energy capacity will soon increase to 100 megawatts or more. The European Union aims to expand its wave, current and tidal power capacity to 40 gigawatts by the year 2050.

The idea of installing photovoltaic modules on the water is not new, and it is already being practised on dammed reservoirs and dredged lakes. The time-tested solar technology is now being progressively adapted to the sea. In February 2018 a Dutch consortium installed a pilot system with a capacity of 8.5 kilowatts on the North Sea and is planning to expand this to 100 megawatts. But South Korea is already a step ahead. The country is constructing a vast floating offshore photovoltaic plant with a total capacity of 2.1 gigawatts off the southwest coast of the Korean peninsula. According to press reports, the first phase of this plant, built at a total cost of USD 3.96 billion, should be connected to the grid by 2022, and the second phase three years later. India, Thailand, Vietnam, Singapore and the Seychelles are also pushing their own pilot projects in this field. The European Commission acknowledges the promising potential of the technology for coastal and near-coastal areas, but also stresses that existing marine applications are still pre­dominately in the research or demonstration phase.

Technical solutions for producing biodiesel, biogas and bioethanol from large algae are also in the early stages of development. The European Commission has judged the potential to be very promising, and expects individual technologies to be ready for the market by the year 2030. 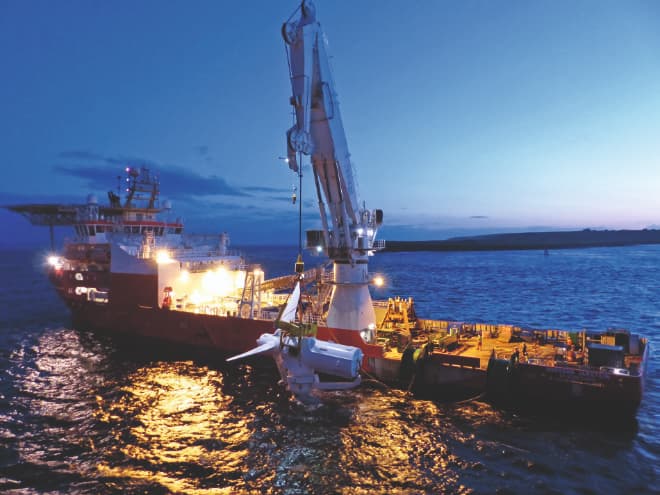 5.32 > One of the fastest marine currents of Scotland drives the underwater rotors of the MeyGen power plant. In the first phase, the operating company installed four turbines on the sea floor, which have been supplying around 2600 households with electricity since August 2018. Further turbines will be added.