In high demand – sand and gravel from the sea

While deep-sea mining remains a prospect for an uncertain future, many countries have been extracting sand and gravel from the sea for decades. ­These two loose aggregates are now among the most sought-after raw materials in the world. They are important not only for the production of concrete, glass, and electronic devices like computers, but also as fill sand at construction sites and in harbours, for coastal protection through beach replenishment, and for land reclamation. From 1960 to 2017, for example, the coastal city-state of Singapore was expanded by more than 130 square kilometres by means of sand filling, and an additional 56 square kilometres are planned by the year 2030. Over the past 20 years, the city-state has imported around 517 million tonnes of sand and gravel for this purpose, making it the world’s ­largest importer of sand.
“Sand” is a collective term for mineral raw materials with a diameter from 0.063 to two millimetres, regardless of the minerals that the individual grains are composed of. Gravel is coarser and can contain material with grain sizes up to 63 millimetres. Most sand originates as the product of natural erosion of rocks on land. But an important portion is also contributed by glaciers, whose ice masses slice along mountain slopes like a planer, and by streams and rivers, which, almost unnoticed, eat into the landscape and wash away large quantities of sand. It usually takes tens of thousands of years before a boulder is reduced to the size of sand and is deposited on the banks of a river or in the sea. But sand is also generated directly in the sea. Parrotfish, for example, eat corals and eventually excrete the indigestible remains of the coral skeleton as sand. An adult may produce as much as 90 kilograms of coral sand each year in this way. Added to this are the many snail and clam shells that are ground up by currents, waves and wind.
All of the sand generated in these ways, however, is insufficient by far to cover the sand demands of humankind. In the year 2014, experts at the ­United Nations Environment Programme (UNEP) estimated that between 32 and 50 billion tonnes of sand and gravel are processed worldwide every year. If this level of consumption continues, which is probable considering the growing world population and increasing urbanization, the natural resources on land, in rivers, and in the sea will be exhausted in less than 30 years. The prices for these two raw materials are already rising considerably, currently at a rate of five to ten per cent annually in Germany.
The quantity of sand and gravel being removed from the world’s oceans is difficult to estimate because the data are not recorded in a central location, and sand deposits in many rivers and coastal areas are excavated illegally. In many places, experts actually refer to a sand mafia. The business is growing because of the enormous increase in demand for the material, especially in economically emerging regions such as China, India and Africa, where there is a great deal of new construction. For example, cement is necessary for the production of concrete. Six to seven tonnes of sand and gravel have to be added to one tonne of cement, which is mixed with water and aggregates to produce concrete. As a result of the global construction boom, the amount of concrete produced every year is enough to build a wall around the Earth at the equator that is 27 metres high and 27 metres thick. Calculating the amount of sand and gravel needed for this, the enormous magnitude of raw-material consumption becomes obvious.

For large construction projects, even desert nations like the United Arab Emirates have to import sand or recover it from the sea, as their local dune or desert sand is not suitable for the production of concrete. This is because the sand grains in the desert have been too thoroughly rounded. Their surface is too smooth and their size too uniform for the cement and other components to effectively adhere to them. The sand grains from rivers or the sea, by contrast, are more angular and have a rougher surface. This is perfect for use as construction sand.
In Great Britain, around every fifth tonne of sand or gravel currently processed as concrete in England and Wales comes from the coastal waters of the island nation. Nevertheless, in 2018 the country held only second place on the list of Europe’s largest marine sand producers. According to the International Council for the Exploration of the Sea (ICES), which provides scientific advice for the North Atlantic, the Netherlands topped the list with a production quantity of around 24.6 million cubic metres. Depending on the grain size, this is equivalent to a total weight of 30 to 40 million tonnes. Around half of this was used for land reclamation on the North Sea coast and on the Dutch islands. This is needed to replace the volumes of sand that are washed away every year by the autumn and winter storms on the North Sea. In 2018 in Europe, a total of around 54.13 million cubic metres of sand and gravel were removed from the sea.
Marine sand and gravel are generally only used when there are no appropriate deposits on land. The mining of sand and gravel in the sea is generally more expensive than on land, which is why, from a global perspective, deposits on land or in rivers are usually preferred. The impacts on the affected environments are enormous. River beds are deepened, which increases the current speed, causing bank areas to be washed away and bridge pilings to be undercut. When coastal sandbanks are removed, the land areas behind them lose their most effective wave barriers. As a consequence, flooding, coastal erosion and storm damage increase. Through uncontrolled sand extraction from the sea, Indonesia has already lost 24 islands.

Biological studies have also proven that sand production is very detri­mental to life on the sea floor. In the North Atlantic alone, more than 48 fish species are dependent on sandy bottom conditions for their spawning areas, including some popular food fishes such as herring. Although the impacts are relatively local, the damage can be very severe when the mined sand or gravel area is the only one around and dependent species lose their only possible habitat. Production contracts should therefore not be issued until a thorough assessment has been carried out. Areas that have been intensively used for sand extraction require an average of five to ten years before they are completely recolonized. Depending on the local environmental conditions (sea swell and sediment motion) and the water depths that are excavated, however, the recovery phase can also take decades.
If dredging is carried out for a short period of time or only once, the original conditions may return within two to four years in an ideal situation. In this case, the biotic communities that are more accustomed to fast currents or strong tides will recover fastest. Species that live in quieter water conditions will generally require longer. If especially deep holes are created by the extraction of sand, and finer material is subsequently deposited there, it may even result in the development of completely new biotic communities.
For these reasons, scientists recommend clear guidelines for the mining of sand and gravel in the sea. These include moratoriums on production in ­regions and at times when important fish species are spawning, regular shifting of the areas of extraction so that the bottom communities have a greater chance of recovering, and maintaining refuges. These lie between the areas of extraction and can serve as retreats for the impacted bottom dwellers.
In addition, for the mining of marine sands a compromise must be found between minimization of the area exploited and duration of the recovery ­phase. When sand is extracted from a single location, creating a deep hole, less total area is impacted, but a longer time is required for the hole to fill naturally and recolonization to occur. If the area of mining is expanded, and only the upper layer of the seabed is scraped off, a larger area is affected but the recovery time is shorter, at least in shallow water depths. In deeper water the seabed requires longer to recover from any kind of disturbance because the water masses do not transport and redeposit as much sediment as they do in shallow-water areas. 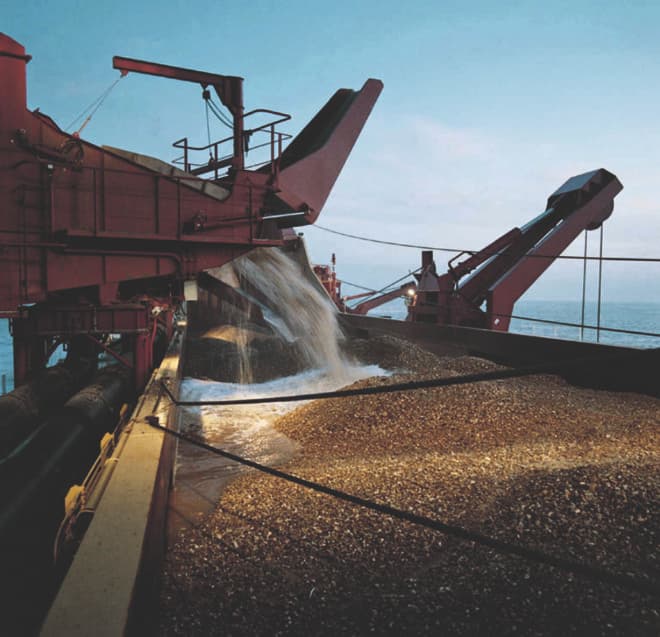 fig. 5.16 > Off the Dutch island of Ameland a suction dredger extracts sand from the bottom of the North Sea to be used in widening the island’s beach.