The levels of the atmosphere

The Earth is surrounded by a blanket of gas that extends from the surface of the planet to an altitude of about 500 kilometres, and which is held in place by the Earth’s gravity. Its name “atmosphere” derives from the Greek words atmós and sfaira (vapour and sphere). The Earth’s atmosphere consists mainly of the gases nitrogen (78.1 per cent), oxygen (20.9 per cent) and argon (0.93 per cent). However, trace gases, also known as greenhouse gases, such as water vapour, carbon dioxide, methane and ozone, with a combined proportion of well below one per cent, are of crucial importance for a climate on Earth that is capable of supporting life. These absorb a portion of the incoming solar radiation as well as a large part of the outgoing heat radiation from the Earth, thus contributing significantly to the warming of the atmosphere. Without the trace gases, the Earth would have an average temperature of around minus 18 degrees Celsius, and the blue planet would more closely resemble a snowball.
The Earth’s atmosphere is composed of several layers, which can be distinguished by their physical and chemical properties. From the bottom upwards it is divided into the troposphere, stratosphere, mesosphere, thermosphere and exosphere.
However, only the two lower layers are important for the ­weather and climate on the Earth. Weather events occur here, especially in the troposphere, where the temperature decreases with increasing altitude by an average of about 6.5 degrees Celsius per 1000 metres. Above the equator, the troposphere extends to an altitude of about 17 kilometres. In the polar regions, by contrast, it is only half as high, namely eight kilometres.
Above the troposphere lies the stratosphere, which reaches an altitude of around 50 kilometres. In this layer, the temperature ­gradually increases upwards again because of the heat that is ­gene­rated when the ultraviolet radiation in sunlight is absorbed in the ozone layer, located 20 to 45 kilometres above the mid-lati­tudes. Although the stratosphere, unlike the troposphere, contains almost no water vapour, stratospheric clouds with a pearlescent lustre can form under extremely cold conditions, especially in the polar regions.
Overlying the stratosphere is the coldest layer of the Earth’s atmosphere – the mesosphere. It extends to an altitude of around 85 kilometres. With increasing altitude, the temperature and air pressure drop significantly, so that the average temperature at the upper margin of the layer is minus 90 degrees Celsius.
In the subsequent layer, the thermosphere, the density of the air is so low that the distance between individual gas molecules can be as much as several thousand metres, so that collisions and the associated exchange of energy seldom take place. The orbit of the International Space Station (ISS) is located in the thermosphere at an altitude of around 400 kilometres. At an altitude of 500 kilometres, the thermosphere transitions into interplanetary space. This transitional zone is called the exosphere. Within this realm the US American satellite SORCE orbits at an altitude of about 640 kilometres. Since 2003 it has been measuring the amount of solar radia­tion arriving at the outer edge of the atmosphere. 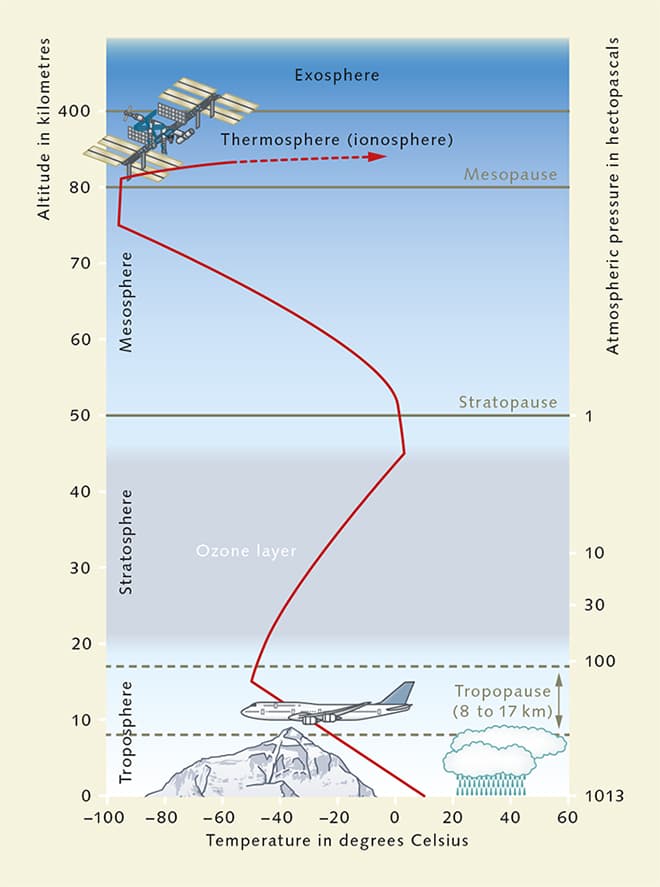 fig. 2.2 > The Earth’s atmosphere is divided into several layers, of which only the lower two are important for weather processes. Clouds and precipitation form in the troposphere. In the stratosphere ozone ­absorbs incoming ultraviolet light as well as heat energy radiated from the Earth.