The Earth’s heat and radiation balance

The Earth obtains its energy almost exclusively from the sun. With a surface temperature of around 5500 degrees Celsius, it emits a hundred thousand times more energy than the Earth, whose average temperature is around 15 degrees Celsius. The sun’s energy impinges on the Earth’s atmosphere as extra-terrestrial radiation. This radiation transmits energy in the form of electromagnetic waves. To understand the radiation ­balance of the Earth, one has to be aware of three physical laws: For one, every body, whether solid, liquid or gaseous, emits electromagnetic ­radiation as a function of its surface temperature. This is true for the glowing star that is our sun as well as for the Earth. Our home planet has a temperature of 288 degrees Kelvin (14.58 degrees Celsius), and thus also radiates independently without the help of the sun.
Secondly, the wavelengths of radiation emitted depend upon the temperature of the body. The hotter it is, the shorter the waves of the radiation released. The filament in an incandescent bulb, for example, becomes so hot that it glows and emits white light, i.e. visible radiation. When the light is turned off, the filament cools down and continues to glow slightly reddish for a moment. This indicates that its radiation maximum has shifted from the short-wave to the long-wave scale. But it would still be unwise to touch the bulb at this time, because even when the metal filament stops glowing and is no longer giving off ­­visible radiation, it continues to emit invisible heat radiation in the infrared ­range. It is still hot enough to burn one’s fingers. As a relatively cool body, our Earth emits only long-wave heat radiation in the infrared range.
Thirdly, the radiation emitted by one body can be reflected or ab-sorbed by other bodies. This is also the case for the Earth-sun system. The global average solar radiation arriving at the outer edge of the Earth’s atmosphere is 340 watts per square metre. About seven per cent of the incoming radiation is UV radiation, 46 per cent is in the range of visible light, and the remaining 47 per cent is in the infrared spectrum.
About 30 per cent of the 340 watts per square metre of incoming radiation is reflected directly back into space by the atmosphere and the Earth’s surface. This amount, around 100 watts per square metre, is called the planetary albedo. Only 240 watts per square metre remain in the climate system and are available to warm the planet. About one-third of this amount (79 watts per square metre) is absorbed by the clouds, water vapour, dust particles and ozone in the atmosphere. This portion thus warms the atmosphere above us. The gases, in particular, filter within very specific wave ranges. Ozone, for example, absorbs almost all of the incoming ultraviolet radiation and is therefore a very effective UV filter.
It is important at this point to note that the air molecules, water ­droplets, dust particles and ice crystals present in the atmosphere reflect the incoming radiation in all directions. The portions deflected upwards go back into space, the rays deflected downwards reach the Earth as ­diffuse sky radiation. Two forms of radiation therefore arrive at the Earth’s surface: the direct solar radiation, which only reaches the surface through a cloudless sky, and the diffuse sky radiation.
Almost 60 per cent of the incident solar radiation (185 watts per square metre) actually reaches the Earth’s surface. Of this around 13 per cent (24 watts per square metre) is reflected directly back into space. This is a portion of the planetary albedo. The remaining 161 watts per square metre are absorbed by the Earth’s surface and provide it with warmth.
The Earth’s surface releases its heat in three ways: firstly, in the form of evaporation – called latent heat (84 watts per square metre), secondly through the rising of warm air masses – called sensible heat (20 watts per square metre), and thirdly by radiating long-wave heat rays (398 watts per square metre). However, only a very small amount of the heat radiation is actually lost directly into space. On its way through the atmosphere it collides with the same obstacles that previously hindered the incoming short-wave solar radiation. This time, however, it is primarily the molecules of the trace or greenhouse gases that absorb the long-wave radiation and ultimately emit it again in all directions as heat ­radiation. They thus trap part of the heat in the lower atmosphere and generate what is called counter radiation (342 watts per square metre). For this reason, the Earth receives a large portion of its emitted radiation back again.
This process is often referred to as the greenhouse effect. But at the same time, the atmosphere does radiate some heat back into space. Comparing the incident solar radiation with the total long-wave radiation emitted at the outer edge of the atmosphere clearly shows that the Earth absorbs slightly more energy than it releases. This fact is of crucial importance, as will be explained later. 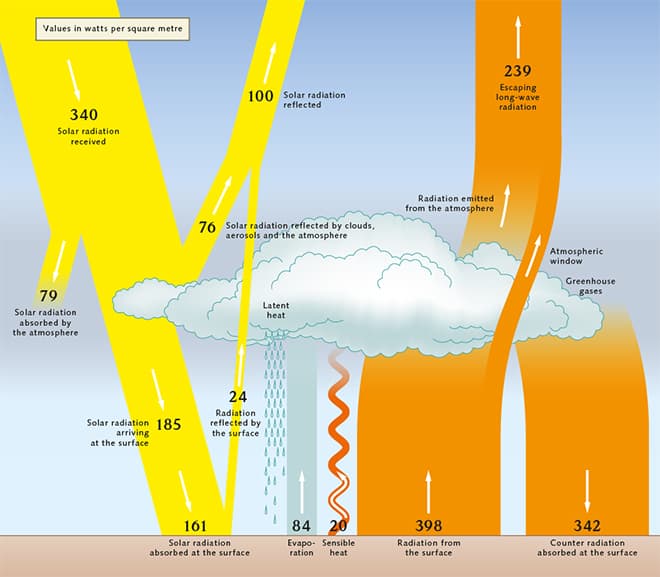