The many aspects of ice

Ice is formed when water freezes. There is great diversity in the manner in which this happens in the polar regions. Based on their different ­features, the following types of ice can be distinguished:

Researchers define permafrost, permafrost soil, or ground ice as the condition when the temperature within the soil remains below zero degrees Celsius for at least two consecutive years, and the water contained in the soil is frozen. The ground can consist of rocks, sediments, or soil, and contain variable amounts of ice. There are areas in the Arctic, in northeast Siberia for example, where the ground contains up to 70 per cent ice. Ground ice can extend to depths of 1.5 kilometres. Permafrost is currently found in as much as 25 per cent of the exposed land surfaces in the northern hemisphere. 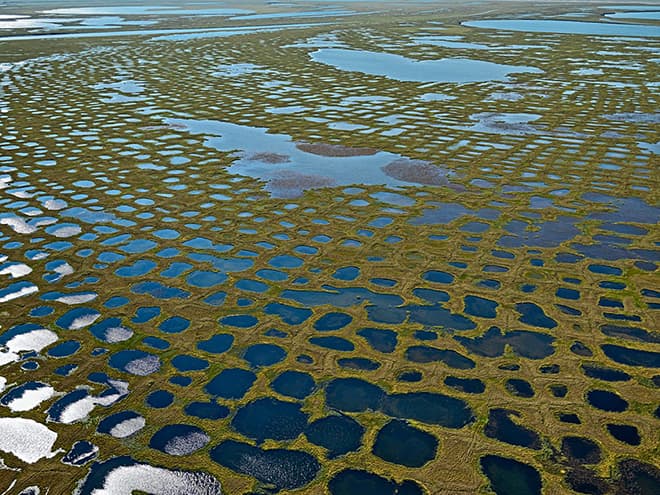 fig. 1.16 > Most permafrost areas can be recognized by their polygonal ­patterns. These are formed by repeated freezing of the ground.

A glacier is a large ice mass formed from snow that is slowly and independently flowing down a valley due to its great mass, and is then depleted in its lower reaches by the melting of the ice. Some glaciers are not much larger than a football field, while others can be hundreds of kilometres long. Today most glaciers are in Antarctica, Greenland and the Canadian Arctic. But there are also some in the high mountainous areas of the Alps, Andes and Himalayans, where they serve as an important source of drinking water for the surrounding regions. The world’s largest glacier is the Lambert Glacier in East Antarctica. It is 400 kilo­metres long and 100 kilometres wide, and alone it transports eight per cent of the ice masses of the Antarctic ice sheet toward the ocean. Like an ice sheet, a glacier can grow or shrink, depending on how much snow falls on its surface in the winter and how much snow and ice melt in the ­summer. 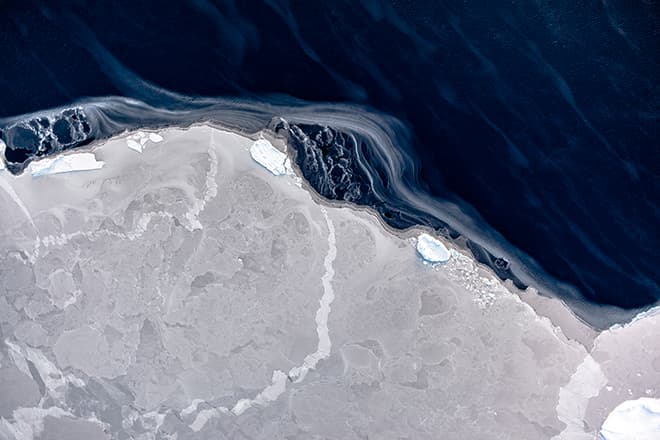 Sea ice is formed when seawater freezes. Because of the salt content it must be cooled to minus 1.8 degrees Celsius for this to happen. Freshwater, by contrast, freezes at zero degrees Celsius. New sea ice contains large amounts of brine, which accumulate in droplet form between the ice crystals or in small brine channels. Over time this brine seeps through to the underside of the ice where it is released back into the water. This explains why perennial sea ice contains hardly any salt.
Sea ice begins to freeze with the formation of ice crystals three to four millimetres in size, called ice needles. These collect on the water surface and as their density increases they are mutually attracted to one ­another. If there is little or no wind a thin continuous crust called nilas is formed. With wind and wave action, however, the crystals eventually form into pancake-like ice plates, which constantly collide with one ­another and are thus somewhat turned up at the edges. This typical form of sea ice is called pancake ice.
Both the nilas ice and the pancake ice become thicker over time and form ice floes that can grow to thicknesses of up to 90 centimetres in the first year. Wind and waves tend to stack these floes on top of each other, creating pack-ice ridges ten to 20 metres thick. These are impassable obstacles even for icebreakers.
Sea ice forms primarily in the polar regions. It freezes in the winter and, for the most part, melts in the summer. In summer the southern polar ocean loses up to 80 per cent of its sea ice. The total area of ice shrinks from 18.5 million square kilometres (September, end of winter) to 3.1 million square kilometres (February, end of summer). By comparison, the Arctic Ocean loses only about half of its ice mass. Its sea-ice area in winter averages 14 to 16 million square kilometres, and in summer it is seven to nine million square kilometres, with a strongly falling trend. 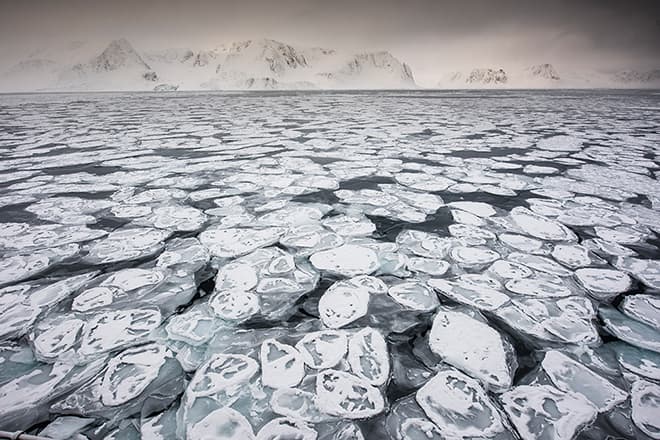 fig. 1.18 > Pancake ice off the coast of Svalbard. The characteristic ice plates are created by surface wave motions.

Ice sheets, also called ice caps or continental glaciers, are extensive ice shields formed from snow lying on a land surface where the total land­scape is covered except for a few isolated peaks, and with an area of greater than 50,000 square kilometres. On the Earth there are currently two ice sheets, the Antarctic continental glacier with an area of 11.9 million square kilometres (without shelf ice), and the Greenland continental glacier with a size of over 1.71 million square kilometres. The Antarctic ice sheet is up to 4897 metres thick in some places and contains so much water that global sea level would rise by around 60 metres if it were to completely melt. The Greenland ice sheet has a thickness of up to 3200 metres and its melting would raise sea level by around seven metres.
Ice sheets are created in regions where the snow falling in winter does not completely melt in the summer. Over time the unmelted snow volumes grow layer by layer and are compacted, first to firn and ultimately to ice due to the increasing weight of the overlying masses with each snowfall. An ice sheet has the shape of a dome. It is thicker in the centre than on the edges. The masses of ice can be thought of as a viscous, unbaked cake batter. Due to their own weight, they flow from the centre of the ice shell toward the edges – just as a lump of cake dough will when it is removed from a bowl and placed on the countertop.
At the margins of an ice sheet, the ice masses usually flow into ­glaciers, ice streams or ice shelves, and are transported toward the open sea. There are some margin areas, however, where the ice does not move and the ice sheet ends abruptly.
As long as the amount of snow that falls on the surface of an ice sheet is equal to or greater than the amount lost at its margins, a sheet is considered to be stable. If less snow is deposited than is lost to the sea, then the ice shield shrinks.

Shelf ice is the seaward projection of an ice sheet or glacier floating on the sea, i.e. the part that no longer rests on land or the seabed. The best-known shelf ice in the world is in the Antarctic, where the Filchner-Ronne Ice Shelf (around 422,000 square kilometres in area) and the Ross Ice Shelf (around 473,000 square kilometres), the two largest of their kind, are found.
The thickness of these ice bodies can vary from one ice shelf to ­another. It can range from 50 metres in the marginal area to 1500 metres in the transitional area between the anchor ice and shelf ice, which is called the grounding line. On the extreme margins of shelf ice, icebergs are constantly breaking off. This process is known as calving. 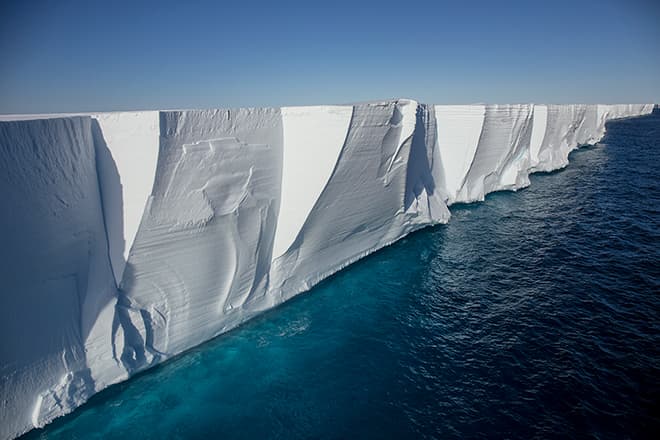 fig. 1.19 > A view of the calving front of the Ross Ice Shelf in Antarctica, the largest ice shelf in the world.