The geographic North Pole has a fixed position. It corresponds to the northern intersection of the Earth’s rotational axis with the Earth’s surface. Its coordinates are thus “90 degrees north”. It is not possible to locate this point, however, using a simple pocket compass. The compass needle actually aligns with the magnetic field of the Earth. This field originates because liquid iron located in the outer core of the Earth circulates and swirls in response to the internal temperature differences and rotation of the Earth. The magnetic field extends into space for a distance of many Earth radii. It shields the planet from dangerous radiation and particles from outer space, and it also possesses a north and south pole. These are defined as the two points where the magnetic field lines extend into the Earth perpendicular to its surface. One of these points is located in the northern hemisphere and the other in the southern hemisphere, but their positions are not exactly diametrically opposed on the globe. Neither of them can be assigned a fixed geographical position because, due to magnetic storms and constant variations in the circulation of iron in the liquid outer core, their locations are constantly changing. The changing results of positional measurements indicate that these poles are wandering. When the North Magnetic Pole was discovered in 1831, it was located near the Boothia Peninsula in the Canadian Arctic. From there, it has since wandered to the northwest and is now moving at a speed of around 55 kilometres per year. It is currently located north of the 85th parallel in the middle of the Arctic Ocean and is approaching Russia. 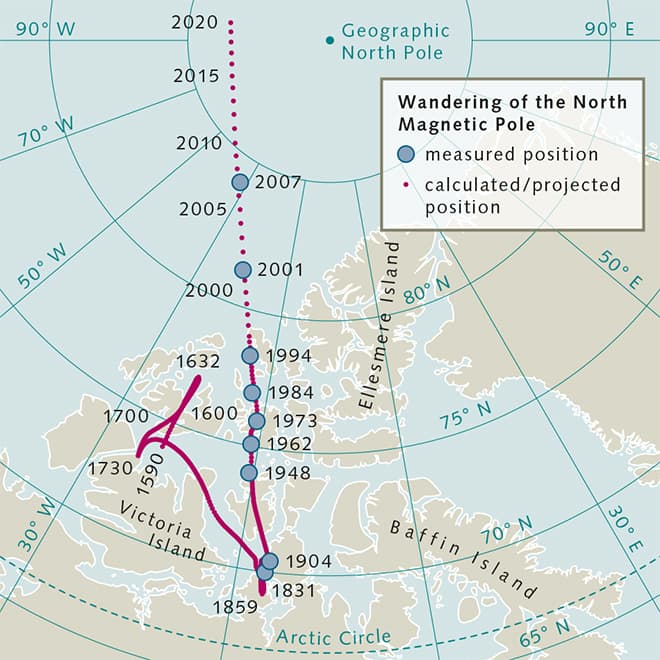 Interestingly, the Earth’s magnetic field reverses itself at irregular time intervals. The magnetic north becomes south and vice versa. For the sake of clarity, therefore, specialists use the term North Magnetic Pole to refer to the magnetic pole located in the northern hemisphere, even when it is a magnetic south pole according to the conventional physics definition, as is currently the case. It is not known why this reversal occurs, but it is known that the change occurs over a period of several thousand years. Scientists also define the geomagnetic poles, which cannot be established through direct measurements but only theoretically calculated. These are based on the assumption that there is an infinitely small bar magnet at the centre of the Earth. The geomagnetic poles are located at the intersection of the axis of the bar magnet with the Earth’s surface. These are very important because they form the basis of the geomagnetic coordinate system. This system is used for navigation underwater, underground, and for every mobile phone compass app. 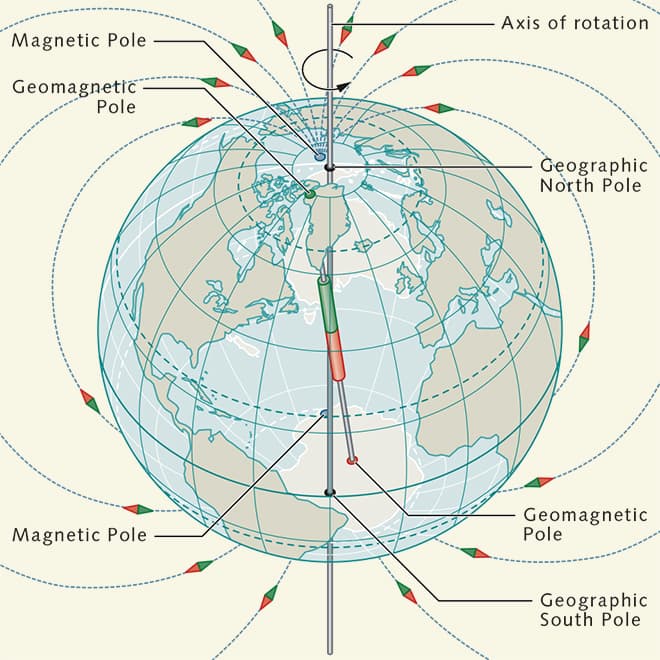 fig. 1.3 > The northern and southern hemispheres of the Earth each have three poles – one geographic, one magnetic, and one geomagnetic.