Mineral resources beneath the Antarctic ice

Antarctica is the only continent on the Earth where no mining has ever taken place. This unique situation is due on the one hand to the extreme temperatures and the extensive continental ice cover, which make geological investigations of the subsurface extremely difficult. And on the other hand, the Madrid Protocol on Environmental Protection to the Antarctic Treaty prohibits any commercial exploration activities south of 60° South lati­tude. However, drilling or sampling of rocks for research purposes is ­permitted.
The geology of the land masses in Antarctica is therefore sufficiently well known in some regions to make assumptions about the potential for raw materials. Researchers now know, for ­example, that there are coal deposits in the Transantarctic Mountains and iron ore deposits in the Prince Charles Mountains in ­eastern Antarctica. It would be logistically and technically very ­difficult to extract these, so from a practical point of view they are of no economic interest. In addition, there is little information available about the quality and total size of these deposits.
The presence of other mineral raw materials is presumed but so far has not been conclusively proven. These include metals such as nickel, copper and platinum. The presumptions are based on the knowledge that the coastal regions of Antarctica have strong geological similarities to the resource-rich margin areas of South America, Africa and Australia, all of which abutted the ­southernmost continent 250 million years ago. The gold-rich mountain range of Witwatersrand in South Africa, for example, may have the same geological features as some parts of Queen Maud Land in Antarctica. The Antarctic Peninsula is an extension of the South American Andes, where metals such as molybdenum, gold and silver are mined. Minor occurrences of these minerals have also been discovered on the peninsula. And in Dufek Massif in the Pensacola Mountains, a highland region in Queen Elizabeth Land in western Antarctica, researchers suspect the presence of platinum-group metals, chromium and other mineral resources like those mined in the geologically similar Bushveld complex in South Africa.
Oil and gas reserves are presumed to be present in the Ant­arctic shelf areas. The thick sediment layers necessary for the formation of these two resources could be present on the shelves of the Ross and Weddell Seas as well as in the Amundsen and ­Bellingshausen Seas. But possible deposits would very probably be too small to make production economically feasible. Moreover, in the shelf areas of Antarctica there are many floating icebergs, some of which are very large. These would present a serious ­danger for drill ships and platforms, and because of the huge masses of ice below the water surface, they could destroy technical installations on the seafloor without warning. The risk of spills and environmental pollution would be very high. 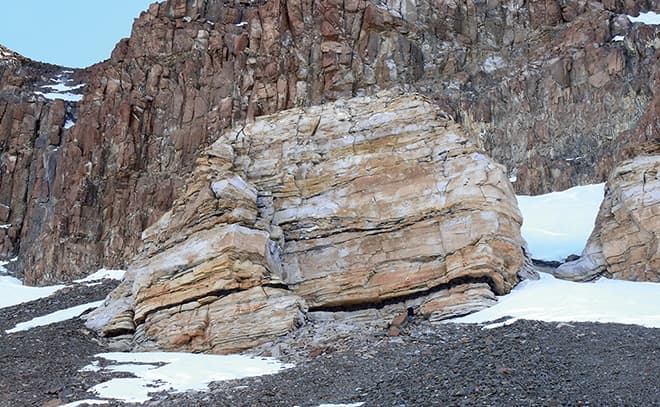 fig. 5.16 > At sites with no ice cover, there is evidence of the presence of mineral resources. The distinct black line at the bottom of this sandstone outcrop in the Transantarctic Mountains is a coal seam that was formed more than 250 million years ago.