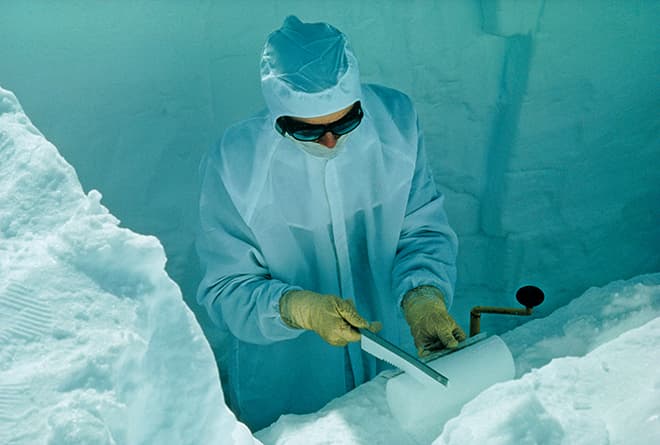 fig. 3.13 > A scientist saws a freshly drilled ice core. He wears protective clothing in order to avoid contaminating the ice sample. The data from these ­investigations provide important information about climatic changes in the past.

A large part of the knowledge we have about the climate history of the polar regions comes from ice cores. These are cylindrical ice samples with a diameter of ten to 15 centimetres, which researchers drill from glaciers and ice sheets using a vertical hollow drill pipe. The ice cores pro­vide a chronological view of the climate records of the polar regions. Every layer of snow that falls on the ice sheets and glaciers, and over time compacts to firn and ice, has a specific crystal structure and characteristic chemical properties depending on the season and weather conditions, which researchers can use thousands of years later to draw conclusions about the climate conditions at the time of the original precipitation. Furthermore, when firn compacts to form ice, air bubbles are trapped, and these preserve the relative proportions of greenhouse gases. Glacial ice is thus the only climate archive that conserves air over long periods of time, which can then be used to reconstruct the chemical composition of the Earth’s atmosphere. Volcanic eruptions and meteorite impacts as well as forest fires and wildfires also leave clear traces in the ice. Their ash particles were originally washed out from the atmosphere by snow or rain. This formerly suspended material forms layers in the ice cores that can be identified by various analytical methods. In some cases they can even be recognized with the naked eye. Based on these layers, scientists can accurately date ice cores from different regions of the world and compare them to each other.
In order to accurately interpret the climate record stored in the ice, its age must first be determined. To do this, one thing researchers do is to look for chemical indicators whose summer and winter concentrations are clearly distinguishable, so that annual layers can be identified. These include sodium and ammonium ions, for example, but also dust particles and calcium ions. Greenland ice cores also often include clearly recognizable melt layers. They represent times when it was so warm in summer that the snow melted on the surface of the ice sheet and the meltwater seeped into the firn and froze again. Based on a thick melt layer of this kind, the Icelandic glaciologist Thorsteinn Thorsteinsson was able to ­prove that it was actually unusually warm on the island in 985, the year the Viking Erik the Red sailed to Greenland. 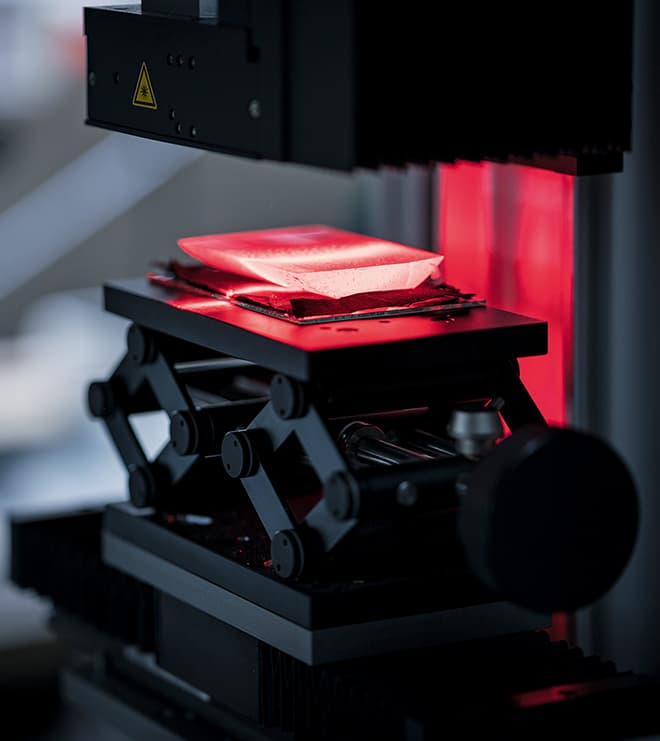 For more detailed analyses, however, the ice cores are then investigated using computer tomography, electrical conductivity, and chemical measurements from small melted subsamples of the ice. From these, ­scientists generate an array of information: (1) From the isotopic composition of the water they can infer the air temperature at the time of the precipitation. (2) The thickness of the annual layers provides an indication of the quantities of precipitation. (3) The researchers can reconstruct the chemical composition of the past atmosphere based on the greenhouse gases contained in the air bubbles. (4) Sea salt, sulphates, and other chemicals in the ice highlight extreme events such as volcanic eruptions or environmental changes related to the biogeochemical cycles. They also allow conclusions to be drawn regarding the past extent of sea-ice cover, incoming solar radiation, wind strength and extreme ­weather events such as droughts. The temperature of the ice measured in the drill holes provides information about the evolution of temperatures in the past, and can thus verify the theory of polar amplification, which states that the temperatures in the polar regions have always changed by a greater amount than the global average.
The resulting climate time series from ice cores extends back 800,000 years in the Antarctic while in Greenland it goes to 128,000 years ago. Their high resolution and level of detail have enabled fundamental advances in knowledge. Thanks to the ice cores, we know that the carbon-dioxide concentration in the atmosphere has risen drastically since the 18th century. It was just 280 ppm at that time, and today it is around 410 ppm.
The climate time series from Antarctica, furthermore, shows that the air temperature in the past has undergone regular fluctuations. These were partially caused by recurring variations in the Earth’s orbital path around the sun, which led to alternating warm and cold periods on the Earth. Comparison of the ice-core data from Antarctica with that from Greenland, furthermore, has shown that climatic developments in the two hemispheres are closely linked. Rapid temperature increases in the northern hemisphere coincide with an onset of cooling in the south, and vice versa. This phenomenon is called the bipolar seesaw. Researchers are presently looking for new drill sites in Antarctica where ice up to 1.5 million years old could be retrieved. The scientists expect it to provide them with even more detailed insights, and answers to many unresolved ­questions about the Earth’s past climate.