Evolution of the eel – a matter of continental drift

Many new animal species have originated when the population of an existing species was divided. Through the course of evolution these separated populations then developed along different paths, so that new species with different traits emerged. The major causes of separation included ice-age glaciers, which cut off ­entire regions from one another, and continental drift, which pulled land masses apart.
In many instances populations of marine organisms were also separated by continental drift. Such processes are exemplified by the eels. Today there are around 15 species of eels, including the American eel (Anguilla rostrata), which lives on the east coast of the USA, the European eel (Anguilla anguilla) and the Japanese eel (Anguilla japonica). It is assumed that all eel species in fact descend from a common ancestor. The home territory of that ancestor lay to the east of the supercontinent Pangaea, in the Tethys Ocean in the general vicinity of present-day Indonesia. The ancestral eel, like the modern eels, must also have made regular long migrations between its spawning region in the ocean and its nursery areas in the rivers.
As the northern part of Pangaea (Laurasia) separated from the southern part (Gondwana), an east-west waterway opened for the first time, connecting the Tethys Ocean in the east with the sea in the west. The ancestral eel was thus able to spread into the western sea. But continental drift continued. Around 140 million years ago Gondwana began to split into the land masses that became Africa, South America, India and Australia. Africa and the land mass of the Arabian Peninsula moved northward and even­tually collided with the Eurasian Plate. This effectively closed the connection between the western and eastern oceans again. The two eel populations were isolated from one another and con­tinued to evolve separately. This theory is known as the Tethys corridor hypothesis. Other hypotheses have been suggested for the genesis of eel species, but experts consider this to be the most probable.
The splitting of the Atlantic population into two distinct species, the European and the American eel, can likewise be attri­- bu­ted to continental drift. Although these animals are outwardly very similar, there are differences in detail that allow a distinction of the two species. Both the European eel and the American eel live in coastal waters and rivers until they reach sexual maturity. They both migrate from their regions in America and Europe into the Sargasso Sea in the Western Atlantic to spawn. Here they release sperm and egg cells into the water. Still in the Sargasso Sea, larvae hatch from the fertilized eggs and then embark upon the return trip toward Europe or America.
During the migration phase back to Europe of one to three years, larvae grow from an initial size of three millimetres to a length of up to 70 millimetres. A second larval stage follows this. While still in the sea, the larvae take on the shape of a willow leaf: at this stage they are also called willow-leaf larvae. These then develop into transparent juveniles called glass eels. They continue to migrate into coastal waters and rivers where they develop into mature animals. Because their respective spawning grounds only overlap slightly, the two species rarely crossbreed. Thus hybrids are only sporadically observed.
It is thought that the Atlantic eel split into two species over time because the Atlantic has continued to widen. Two popula­tions were formed, one in the east and one in the west. Even today the Atlantic is widening by several centimetres each year. This is because two continental plates are slowly moving apart in the middle of the Atlantic. Today the European eel has to swim a distance of 5000 to 6000 kilometres to reach its spawning grounds in the Sargasso Sea. 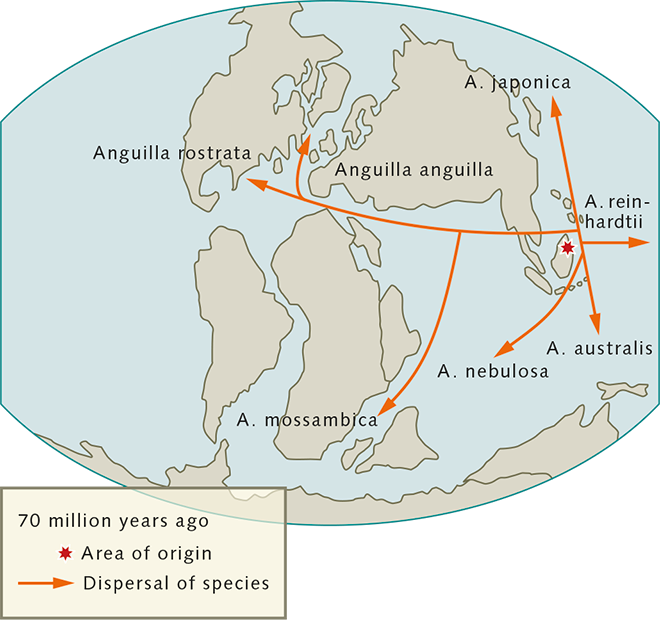 fig. 1.7 > Before Europe and Africa were connected by a land bridge the eels could disperse from the east to the opening Atlantic Ocean region.