The formation of the El Niño climate phenomenon has been a puzzle for many years, and even today it is not completely understood. Today it is known that an El Niño event is related to two important atmospheric circulation systems: Hadley Circulation and Walker Circulation. The Hadley Circulation is like a rolling drum of air currents that circulate worldwide in the tropical latitudes. Because the sun is high in the sky all year round in the tropics, air masses are warmed there, then rise and flow northward and southward toward the poles. The circulation is completed when air masses in the lower layers of the atmosphere flow back toward the equator, there to rise again. The circular motion occurs because the upper-level air flowing poleward from the equator gradually cools down and sinks again near the ­Northern and Southern Tropics, at around 23 degrees of latitude. This circulation was named after the man who discovered it, the English physicist George Hadley. Because the Earth is rotating, the sinking air masses flowing back toward the equator are deflected to the west, so that the surface winds in the northern hemisphere come from the ­northeast (northeasterly trade winds) and in the southern hemisphere from the southeast (southeasterly trade winds). These steady winds push the surface waters of the tropical Pacific toward the west, away from the coast of South America. This constant westward forcing results in a sea level in the West Pacific off South East Asia that is up to 60 centimetres higher than that off the western coast of South America.
Replacing the surface water pushed westward away from the South American coast by the trade winds, cold, nutrient-rich water from below flows upward to the surface. This phenomenon is called upwelling. This water is also forced to the west, forming a cold tongue of water ex­tending out into the Pacific. But as it moves westward it is constantly heating up, until the water masses finally reach a temperature of around 30 degrees Celsius off the South East Asian coast. Because of the heat, large amounts of the water evaporate off South East Asia, forming intense cloudiness and resulting in the development of a warm tropical rainforest climate.
The other circulation system, the Walker Circulation, only occurs in the Pacific. It flows in an east-west direction, at right angles to the Hadley Circulation. This circulation, named after its discoverer, the English physicist Gilbert Walker, is driven by atmospheric pressure differences between the western and central Pacific.
As a rule, there is a stable low-pressure system above the western Pacific near South East Asia and a high-pressure system in the central Pacific. This results in a constant westward flow of the air masses from the area of high pressure to the area of low pressure. Warm humid air rises here, forming clouds over South East Asia and leading to rainfall. At higher altitudes this air then flows directly eastward, oblique to the Hadley Circulation. Above the South American continent the air descends and flows westward again. Because its humidity has been lost over ­South East Asia through the heavy rainfall, the air that descends to the western coast of South America is very dry. Due to the combined components of Walker Circulation and Hadley Circulation, there is a strong prevailing wind toward the west in the lower layers of the atmosphere, which maintains the stable coastal upwelling system.

During an El Niño event there is a significant change in the relative atmospheric pressures: above South East Asia the pressure increases and in the central Pacific it drops. The prevailing winds weaken, decreasing the water transport from east to west. The changing air pressures ultimately progress to the extent that the east-west relationship is reversed. A high-pressure system forms over South East Asia and a low-pressure system over the central Pacific. The westward-blowing winds weaken significantly, and the wind direction can even be reversed. As a result, the warm surface water then flows from South East Asia toward South America. This often produces unusually heavy precipitation on the dry west coast of South America. In spite of intense research, the reason for this reversal in atmospheric pressure is still unknown.
The name “El Niño” is Spanish for “the child” and refers to the infant Jesus. It originates from South American fishermen who have long known that El Niño reaches its peak around Christmas time. Today ­scientists refer to the phenomenon as ENSO, which stands for El Niño southern oscillation. This highlights the fact that the phenomenon occurs in the south and is driven by the oscillation of atmospheric pressure between the east and west. An El Niño event can last for more than twelve months. 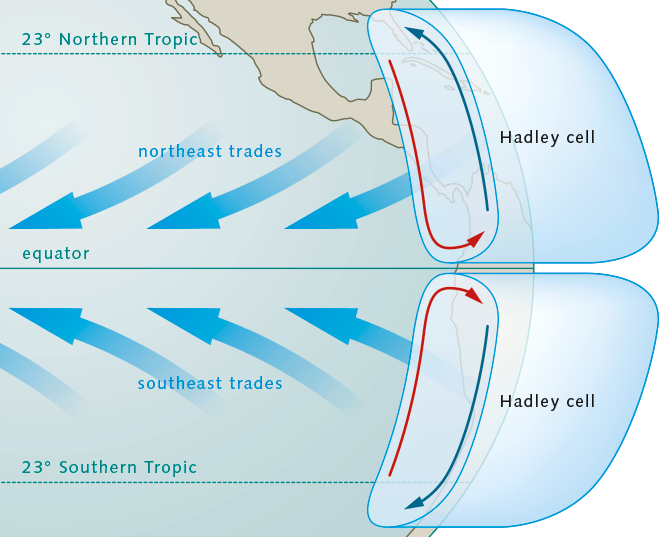 fig. 3.31 > The Hadley Circulation is a drum-like air circulation pattern that operates in the tropics and moves air between the equator and the Northern and Southern Tropics. © maribus

Besides El Niño, there is another deviation from the normal atmospheric pressure regime in the Pacific called “La Niña” (“the girl”). During a La Niña event the normal atmospheric pressure difference becomes more pronounced. Thus, the pressure in the western Pacific low-pressure ­system falls even further and it increases even more in the central Pacific. In this extreme situation, the winds blowing toward the west increase in strength, which also increases the transport of water from South America toward South East Asia.
Today it is known that in addition to El Niño and La Niña, there are other variations of this phenomenon. There are El Niño events that ­ do not encompass the entire Pacific. In these cases, the air-pressure relationship between the western and central Pacific changes, but the warm water does not extend as far as South America. Japanese scientists published an article in 2004 in which they described this unusual El Niño variant. According to their work, the air pressures over the Pacific change as follows: a low-pressure system develops in the central Pacific; at the same time high-pressure systems form in both the eastern and western Pacific, so the wind flows from both directions toward the low-pressure area in the central Pacific, where the warm air then rises and forms clouds. These rain down in the ­central Pacific. The Japanese researchers called this form “Modoki”, a Japanese ­phrase that follows and qualifies the noun. It means “similar, but different”. This variant has since been referred to by experts as El Niño Modoki. 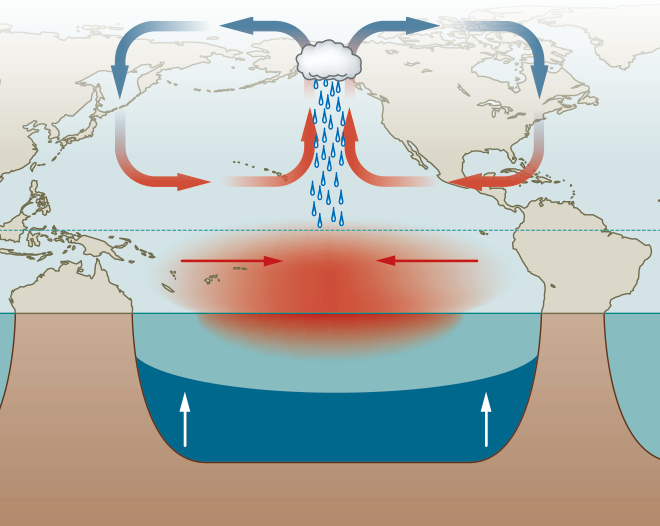 fig. 3.32 > During the rare phenomenon known as El Niño Modoki, the wind blows from the west and east toward the low-pressure area in the central Pacific. © maribus