At this point in time, no one can say with certainty how strongly the climate will change in future, especially as the amount of carbon di­oxide (CO2) emitted from the burning of fossil fuels (natural gas, petroleum and coal) in years to come is an unknown quantity. The demand for fossil fuels in turn depends on population growth, future energy needs and the degree to which renewable energies will be used. Moreover, land use, such as the destruction of rainforests and their conversion to arable land, also has a significant impact on the atmospheric carbon dioxide balance.
As it is not possible to accurately predict these developments, the Intergovernmental Panel on Climate Change (IPCC) has adopted four different scenarios that differ in the projected atmospheric CO2 concentrations in the year 2100. These sample scenarios are termed Representative Concentration Pathways (RCPs). Specifically, the IPCC calls these four trajectories RCP2.6, RCP4.5, RCP6.0, and RCP8.5, with the numerical values indicating the degree to which the different CO2 concentrations in the year 2100 will have altered the Earth’s energy balance. The IPCC expresses this change as “radiative forcing”. Radiative forcing is a measure of the degree to which additional energy is reaching the Earth’s surface over time. It is expressed as radiant flux and measured in Watts per square metre (W/m2). It generally describes the amount of energy reaching 1 square metre of the Earth’s surface per second, for example from natural sunlight. While radiant flux provides a momen­tary value, radiative forcing describes the degree to which radiant flux changes over time. For its RCP scenarios the IPCC compares the projected radiant flux values for the year 2100 with the radiant flux in 1860, when systematic weather recording began. The difference between these values provides an estimate of radiative forcing as a multiple of the 1860 value.

Abb. 3.3 > The IPCC developed scenarios projecting climate change pathways ­based on a range of calculations. To this end, the IPCC more closely assessed causes and effects and found that the trajectory of climate change and the increase in average global temperatures are determined particularly by the trajectory of population growth and the associated increase in the consumption of fossil fuels. The RCP2.6 pathway is the most optimistic scenario and RCP8.5 the most pessimistic.

The IPCC has found that the oceans have stored the major proportion of the energy accumulated between 1971 and 2010 as a result of human-induced global warming. Overall, the upper ocean (0 to 700 metres depth) stored 64 per cent and the lower ocean (700 to 2000 metres) stored 29 per cent of this energy. Three per cent contributed to ice melt and another 3 per cent contributed to the warming of the continental terrestrial surfaces, while only about 1 per cent contributed to atmospheric warming. If CO2 emissions continue to rise it is highly ­probable that the oceans’ deeper water layers will also gradually store some of this energy but the extent to which this will occur has not yet been clarified. For the upper ocean up to a depth of 700 metres, the moderate RCP2.6 scenario projects a global temperature increase by an average of 0.5 degrees Celsius by 2100. However, consideration must be given to the fact that different oceanic regions will experience different levels of warming depending on local conditions. In contrast, the pessimistic RCP8.5 scenario projects an increase of more than 3 degrees Celsius in the upper 700 metres of the global oceans by 2100. For some Arctic regions, RCP8.5 even predicts an increase in water temperatures by up to 5 degrees Celsius.
The scenarios also differ significantly in terms of the projected sea-level rise. The RCP2.6 scenario projects a sea-level rise of between 26 and 60 centimetres, while under the RCP8.5 scenario sea levels would rise by almost 100 centimetres. Overall, the current IPCC scenarios very clearly set out the specific impacts climate change will have on the ­oceans. The likelihood of certain impacts such as extreme storms or floods, however, can not yet be predicted precisely. Moreover, some impacts are more predictable than others. The degree of ocean acidification for example can be predicted by way of relatively simple chemical equations. In contrast, the degree to which cyclones will increase depends on a whole array of physical parameters. Therefore, the IPCC sets out its predictions for the occurrence of certain phenomena by likelihood, differentiating between the following categories:

fig. 3.4 > For the period to 2100, the IPCC develops scenarios differing by their projected atmospheric CO2 concentrations, which in turn depend on global population growth and associated energy consumption, among other factors. The highest sea-level rise is expected for the RCP8.5 scenario with the highest atmospheric CO2 concentration. It is very difficult at present to predict post-2100 developments of the global population, energy consumption and other parameters. For the period after 2100, the IPCC therefore does not use the four nuanced RCP scenarios but three emissions scenarios. The high emissions scenario is however comparable to the RCP8.5 scenario as it is similarly premised on a high level of fossil fuel consumption. The high emissions scenario anticipates sea-level rise of up to 6.63 metres by the year 2500. 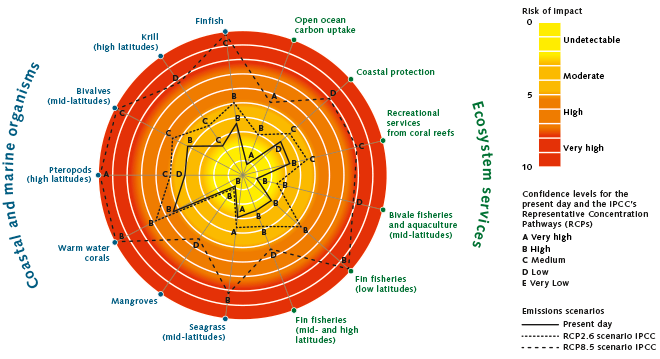 fig. 3.5 > Many organisms and ecosystem services of the oceans and of coastal waters in particular are highly at risk from climate change. The IPCC sets out different likelihoods of specific impacts occurring. The changes shown in the diagram need not necessarily mean that species will become extinct but they may result in changes in ecosystems as a result of the organisms in question migrating to other areas that still provide them with optimum conditions.