How acute is coastal water acidification?

Carbon dioxide (CO2) gas contained in the atmosphere is easily dissolved in water. This is well known in the form of sparkling water products into which CO2 has been dissolved under pressure. In the dissolution process the CO2 reacts with the water molecules (H2O)). When it is absorbed from the atmosphere carbon dioxide is in part transformed – into carbonic acid (H2CO3), hydrogencarbonate ions (HCO3-) and carbonate anions (CO32-). The transformation is illustrated in three equations:

Together, all of the chemical species in water that derive from CO2, comprising carbon dioxide, carbonic acid, hydrogencarbonate ions and carbonate ions, make up what is known as dissolved inorganic carbon (DIC).
The various forms of DIC can transform into one another through the chemical reactions described in the equations.
This CO2 equilibrium system controls the content of free hydrogen ions (H+) in seawater and thus the pH value, which is a measure of the amount of free hydrogen ions in a liquid. The “p” stands for potential and “H” for the Latin word Hydrogenium (hydrogen). The reaction of carbon dioxide in seawater proceeds summarily as follows: First, the carbon dioxide reacts with water to form carbonic acid. An H+ ion then splits off the carbonic acid, forming a hydrogencarbonate ion. This hydrogencarbonate ion can then, in the next step, lose another H+ ion to form carbonate.
Considering the first and second equations, which are coupled with each other in water, it is clear that when more CO2 is ab­sorbed in the water, more H+ ions are produced, making the water gradually more acidic. If more alkalinity is added to the system in the form of hydrogencarbonate ions and carbonate anions, however, hydrogen ions are captured, so that the pH value increases and the water becomes more alkaline.
Alkalinity in the water basically has a double function. For one, it influences the pH value through reactions with the H+ ions. For another, it is fundamentally crucial in enabling calcite-producing marine organisms such as corals, clams, snails and many planktonic organisms to secrete their shells and carapaces. For this, the creatures remove carbonate anions and calcium ions (Ca2+) out of the water to produce calcium carbonate (CaCO3), which is also an important component of human bones.
The more carbonate ions there are in the water, the easier it is for the animals to produce calcium carbonate. Because ocean acidification leads to a long-term reduction in the concentration of carbonate anions in the water, the ability of marine organisms to form shells and skeletons is likewise reduced. In extreme cases, when very little carbonate is available in the water, acidification of the water can even lead to the dissolution of calcite shells and skeletons. 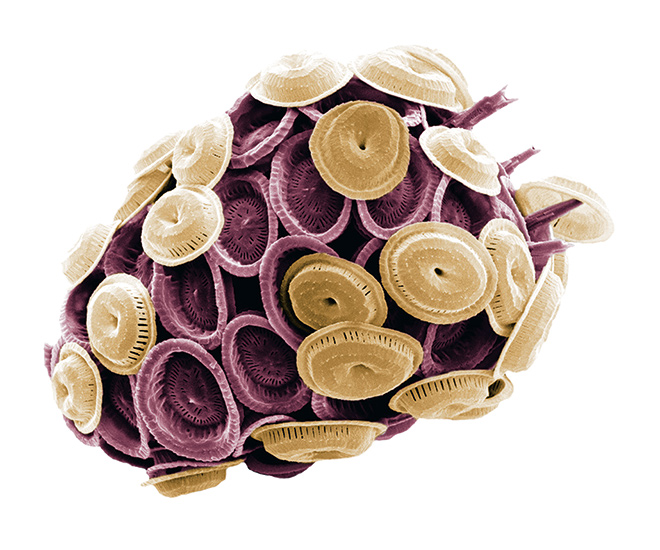 fig. 3.14 > The microscopically small coccolithophorids (calcareous algae) form an exoskeleton of calcium carbonate plates. Over millions of years the plates of dead coccolithophorids have accumulated on the sea floor to form thick carbonate layers. The white cliffs of Dover are also composed of these plates. © Markus Geisen