Ocean governance in a wide arena 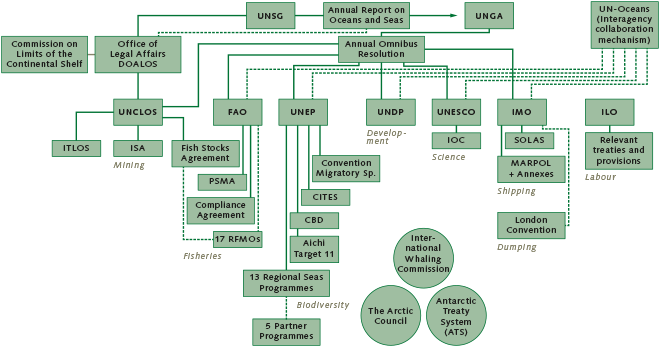 fig. 3.8 > At the level of the United Nations alone, many organizations are wholly or partially involved with aspects of the ocean. Solid lines indicate direct dependencies between bodies and international agreements. Dashed lines indicate functional links. Intergovernmental organizations that do not directly form part of the UN system (such as the International Whaling Commission) are shown separately. “Aichi Target 11” refers to the goal adopted at the biodiversity conference in Aichi, Japan, of assigning protected status to 10 per cent of marine areas by the year 2020. © Global Ocean Commission

Today many institutions under the umbrella of the UN are dealing with the aspect of ocean governance. The most important regime is the UN Convention on the Law of the Sea (UNCLOS) which sets out the international ground rules for marine policy. Under the umbrella of the UN and UNCLOS, responsibilities in the marine context can be roughly broken down into the areas of labour law, biodiversity, development (particularly in developing countries and emerging economies), fisheries, sea mining, shipping and science. The standards of the responsible UN bodies or of the respective international agreements are not all legally binding to the same degree. UNCLOS requires member states of the UN to protect the sea but leaves it to them to transpose marine protection into national laws. The rules of the IMO for shipping, in contrast, are binding and can be enforced in the event of a breach. Ships can also be reined in if ships’ masters circumvent IMO regulations. In many other cases, however, there is no means of sanctioning misconduct. One ­example is the Convention on Biological Diversity (CBD), which entered into force in 1993 and today has 196 parties. It has three objectives: conservation of biodiversity; sustainable use of the components of biodiversity; and fair and equitable sharing of the benefits arising from the use of genetic resources. The difficulty surrounding implementation of this convention is that the CBD is viewed as a framework agreement with general objectives. Unlike UNCLOS, the ISA or the IMO, there are no administrative structures for the CBD. There is not even a headquarters with its own administration, but merely conferences at which goals are defined. In accordance with the CBD, signatory states and groups of states like the EU have to enshrine the CBD goals in their respective legislation. However, the convention lacks clear criteria, limit values, sanction measures or deadlines. The upshot of all this is that so far many nations have no comprehensive strategies for the protection of biodiversity – either on land or in the ocean.