The vicious cycle of poverty and environmental destruction

In many regions, the destruction of coastal ecosystems primarily harms the poor as they are dependent for their survival on a range of products obtained in their immediate surroundings, such as fish or mangrove timber. They do not earn enough money to be able to acquire food or energy by other means, or to move away from regions affected by environmental degradation. In this context, experts distinguish between two types of poverty: exogenous poverty and endogenous poverty.
Exogenous poverty in a population is initially caused by external factors. This may happen, for example, if resource exploitation ruins local livelihoods and the local population does not share in the proceeds, such as in cases where large fishing fleets, with the government’s permission, exploit local fishers’ fishing grounds. Similarly, the exploitation of mineral resources in a context of ir-responsible governance may cause exogenous poverty. In Papua New Guinea, for example, millions of tonnes of toxic effluent were discharged from a copper and gold mine into the Ok Tedi river and the sea between 1984 and 2013, thus poisoning the river, swamps and coastal waters for many years.
Endogenous poverty as caused by the population itself often follows on from externally induced (exogenous) poverty. In order to survive, people may need to exploit alternative resources, for example by switching from fishing to arable cropping. Due to a shortage in agricultural land, unsuitable soils are often tilled or forests are cleared. Soils degrade and erode, resulting in further environmental degradation. More often than not endogenous poverty draws people into a vicious cycle as the progressive loss of natural resources results in further overexploitation of resources, i.e. the natural capital.
Haiti has suffered the drastic consequences of this vicious cycle. Haiti is a country on the island of Hispaniola in the Caribbean, occupying the western part of the island, while the eastern part is the territory of the Dominican Republic. Plagued by civil wars and many years of irresponsible government policies, Haiti is one of the western hemisphere’s poorest countries. Roughly 65 per cent of Haiti’s inhabitants live on less than 1 US dollar a day. The World Bank defines extreme poverty as having to subsist on less than 1.25 US dollars/day. 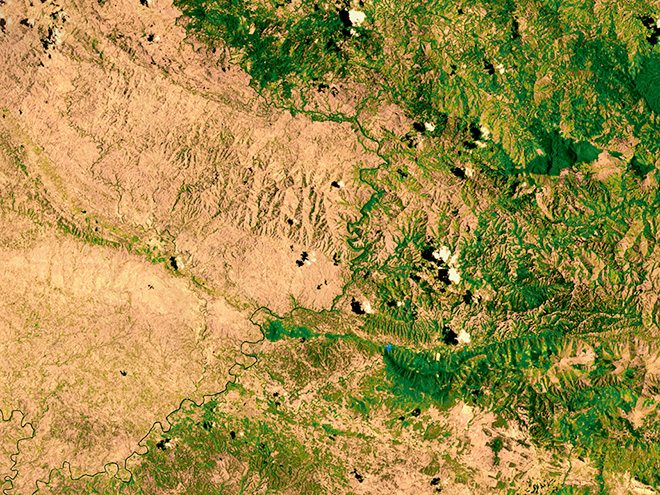 fig. 2.25 > Image of the border, formed by a river, between Haiti (left) and the Dominican Republic. Poverty has resulted in the almost complete deforestation of Haiti. In contrast, the Dominican Republic retained a greater proportion of its forest cover, offering the country’s population better protection from the effects of hurricanes. © NASA/ Goddard Space Flight Center Scientific Visualization Studio

Haiti used to be completely forested. However, as early as the 1950s widescale logging commenced for the production of wood charcoal. Rapid population growth and poverty led to the almost complete deforestation of Haiti by the 1990s to make way for cropland. Forest cover declined to roughly 4 per cent of the ori-ginal area. Coastal mangrove forests were also largely destroyed. Haiti’s climate today is much drier than it was in the past, as the soils retain and evaporate much less water than they did when they still had their forest cover. Precipitation has declined by up to 40 per cent.
The fallout of this poverty-induced deforestation proved no less than catastrophic when in 2004 Hurricane Jeanne swept over Hispaniola and dropped torrential rainfall, flooding parts of the island. The destructive power of Hurricane Jeanne reigned free in the unprotected Haiti. Due to the lack of forest cover many regions suffered landslides. Approximately 5400 people were killed. In contrast, only 20 people died in the Dominican Republic which has retained roughly 28 per cent forest cover and is still to some extent protected by mangrove forests.