Climate change will radically alter conditions in the marine environment in future. Atmospheric warming will be accompanied by a rise in the temperature of seawater. Scientists attribute the mass die-off of tropical coral reefs to rising water tempera­tures. Furthermore, a large amount of the carbon dioxide emitted into the atmosphere from the burning of coal, oil and natural gas dissolves in seawater and, put simply, forms carbonic acid. The likely impacts of this ocean acidification are still impossible to predict. The melting of the continental glaciers in Greenland and the Antarctic has the potential to cause sea levels to rise by several metres over the coming centuries. This would spell disaster for people living in low-lying coastal regions. These impacts of climate change can only be avoided if humankind switches from fossil fuels to renewable energies as soon as possible.
The marine environment can facilitate this process. The wind across the sea, the waves and the currents contain vast amounts of kinetic energy, i.e. the energy of motion, which can be converted into electri­city. The key renewable marine energies are:

Electricity currently accounts for around 18 per cent of the world’s total energy consumption. Renewable marine energies have the potential to meet a substantial share of the world’s electricity needs. Wind ener-gy appears to be the most promising: experts estimate that offshore wind power alone could in future supply around 5000 terawatt-hours (TWh) of electricity a year worldwide – approximately a quarter of the world’s current annual electricity consumption of about 20 000 terawatt-hours (1 terawatt-hour = 1 trillion watts). However, it is essential to differentiate between the technical potential of an energy techno-logy and its sustainable potential. The technical potential includes all the plant locations which are theo­re­ti­cally feasible. The sustainable poten­tial looks at environmental factors, such as the damage that the con-struction of foundations for offshore wind turbines causes to seabed habitats. The sustainable potential is accordingly lower than the tech-nical potential.
Offshore wind power is the marine energy currently at the most advanced stage of development. In 2014, the many thou­sands of wind turbines installed worldwide had a total nominal capacity of 8795 megawatts. An average offshore wind turbine produces 2 to 4 megawatts – enough to ­supply around 5000 households with electricity. Nominal capacity is the maximum output generated by a wind turbine in optimum wind conditions. At present, the total capacity of offshore instal­la­tions is low compared with onshore wind farms. For example, the wind turbines installed onshore in the German state of Lower Saxony alone have a total capacity of around 8300 megawatts. Nonetheless, the expansion of offshore wind energy has gained considerable momentum in recent years. In 2011, annual global cumulative offshore wind capacity was just 4117 megawatts. Installed capacity has thus more than doubled between 2011 and 2014.

Europe in particular has greatly expanded its offshore wind power sector in recent years. At the end of 2014, 2488 offshore wind turbines were installed in European waters, making a cumulative total of 8045 megawatts. Europe thus produces some 90 per cent of the world’s offshore wind-generated electricity. The United Kingdom leads the field, with around 4500 mega­watts of installed capacity in its coastal waters. There are several reasons why the UK has surged ahead: the expansion of offshore wind began early on; as an island, the UK has a large EEZ; and, thirdly, turbines were erected in shallow waters fairly near to the coast. In Germany, by contrast, there were massive protests against offshore wind expansion near the coast. The tourism industry was con-cerned that holiday-makers would be disturbed by the sight of large wind farms on the horizon. Conservationists cautioned against siting wind turbines close to the Wadden Sea, a UNESCO World Heritage site and an important resting area for millions of migratory birds. Most of Germany’s wind farms are therefore located in deeper waters some distance offshore, creating greater technical complexity. Delays also occurred in Germany because the routes selected for the power lines connecting the wind farms to the onshore grid ran through sea areas contaminated with un­exploded ordnance from the Second World War, which first had to be cleared.
China has emerged as the global leader in the expansion of onshore wind energy, taking only a few years to achieve this status. Experts are therefore predicting that China will also invest heavily in the expansion of offshore wind. In the US, by contrast, only a small number of offshore pilot projects have been launched to date.

fig. 4.17: The United Kingdom currently leads the field in the expansion of offshore wind power. In Germany, many offshore projects are now nearing completion, so it is likely to move up to second place over the next few years. The current dynamic momentum in this market is evident from the fact that global cumulative offshore wind capacity has doubled in just a few years. © GWEC

There is growing interest in offshore wind energy in Japan as well. Here, however, there is a very steep descent to the deep ocean floor, with very little shallow water around the Japanese islands compared with Europe. Japan therefore favours floating wind farms which stand upright in the water and are anchored to the seabed with steel cables. A number of these installations already exist around the world. This is viewed as a mature technology, although the great depths involved make it more expensive than conventional wind farms.
Compared with wind, the other offshore marine energy technologies are still in their infancy. Although a number of wave, ocean current and osmotic power plants already exist around the world, many of them are prototypes. Industrial production on a large scale, comparable with wind energy, is still a long way off. Ocean thermal energy conversion (OTEC) is the least advanced of these technologies. In the 1990s, several small-scale prototypes were built in Hawaii, but a larger fully opera­tional system has yet to be constructed.
Tidal power plants have been an established technology for decades, but rely on dams and barrages for the installation of large turbines, making their construction extremely complex. For that reason, very few of these plants exist worldwide. A notable example of a tidal power plant is the La Rance Barrage near the town of Saint-Malo in France, which has been in operation since 1966. 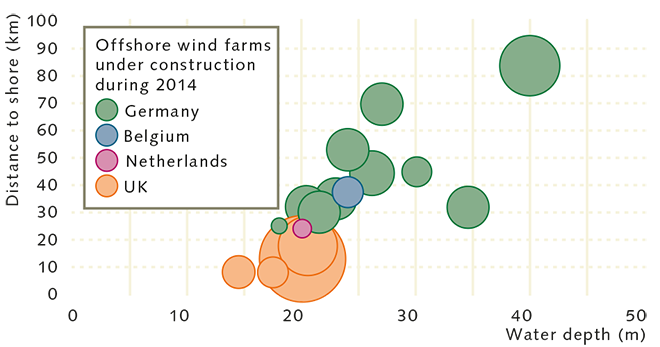 fig. 4.18: Other countries, different building regulations: in Germany, the con-struction of wind farms near the coast is banned, whereas the United Kingdom has built many wind farms in much shallower waters directly off the coast. This is possible, not least, due to the lack of extensive tidal sand and mud flats in the UK. © EWEA