The classic and the extended “three pillars” model 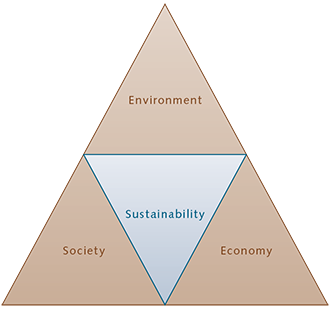 fig. 1.6 > In the classic three pillars model, the environment, the economy and society are represented as three columns of equal stature sup­porting sustainability. The aim of this model, developed at the end of the 1990s, was to pave the way for sustainable development. Its underlying assumption is that economic, social and environmental concerns are interconnected and form an indivisible whole for the purposes of sustainable development. One refinement is known as the weighted three pillars model. In order to underscore the great importance of the environment, in this scheme it is represented as a foundation, formed by two factors: natural resources and the climate. Resting on this foundation are the pillars of the economy, society and – a new addition – culture. In the past 20 years, numerous other modifications of the three pillars model have been developed. One criticism levelled is that the classic version shows the environment, the economy and society as having equal standing, but does not make this a reality. Even now, the critics point out, in many cases economic concerns still take precedence over environmental or social aspects. © maribus