Many hydrothermal vents have been found by coincidence during expeditions in magmatically active ocean regions. The search for new hydrothermal vents is difficult because areas just a few tens to a hundred metres in size must be found within the vast ocean. For this search, marine scientists usually employ sensors lowered from the ship on a steel cable. The sensors can recognize hot water plumes by measuring the turbidity of the water, the temperature, or chemical signals.
However, measurements can only be made at selected points at a particular site. In recent years, therefore, autonomous underwater vehicles (AUVs) have been increasingly used. The torpedoshaped AUVs are also equipped with these sensors. They are capable of travelling freely through the water and diving down to the sea floor. After an excursion of around 20 hours they return to the ship.

With the help of autonomous underwater vehicles, as many as 10 new hot water plumes have been discovered on a single expedition. They cannot determine the precise position of the vent, however. Furthermore, it cannot be known whether there is actually a hydrothermal vent at the seabed with sulphide-rich black smokers. This can only be confirmed by the use of towed cameras, cameras on bathyscaphes or submersible robots, or with sonar instruments that can reproduce the image of individual chimneys using acoustic signals. It is therefore necessary to distinguish between proven and unconfirmed hydrothermal vents. Currently, in addition to the known occurrences, an additional 200 unconfirmed hydrothermal vents have been identified.

Old massive sulphide deposits at dormant hydrothermal vents are also best identified by camera observations near the bottom. A useful indicator for these is staining on the sea floor such as rust, which suggests the presence of iron. Initially, the size of such a deposit is roughly estimated. One technique researchers use to estimate thickness is to observe whether the deposit is higher than the surrounding sea floor. Using data from past experience the density of the sulphide is estimated. They then derive an approximate tonnage based on the area covered by the deposit and the estimated density.
It is now known that the estimates based on underwater pictures have frequently been too high, because subsequent analyses have often revealed that hardly any sulphides were in the seabed. As drilling is very expensive, however, efforts beyond the initial estimates are often not carried out.
Furthermore, still little is known about how the metals are distributed in the massive sulphide deposits. In some areas it has been confirmed that the metals are mainly concentrated on the surface of the deposit while in the interior the concentration drops sharply. A deposit is only profitable, however, when both the tonnage and the content of the desired metal are large enough. Many of the occurrences known today do not meet these conditions.

On the other hand, scientists assume that there are many old massive sulphide deposits hidden in the vastness of the deep sea that could be very interesting economically. It is true that the volcanically active zones in which active hydrothermal vents are found are usually only a few kilometres across. But since the entire ocean was formed, after all, through this kind of volcanic activity, it stands to reason that massive sulphide deposits must exist everywhere throughout the ocean. Over time, many of these occurrences have probably been covered by thick layers of younger sediments. It is thus very difficult or maybe even impossible to discover these. Even if the massive sulphide deposits could be found, mining them would only be economic if the sediment layers were thin and could be removed without much effort. 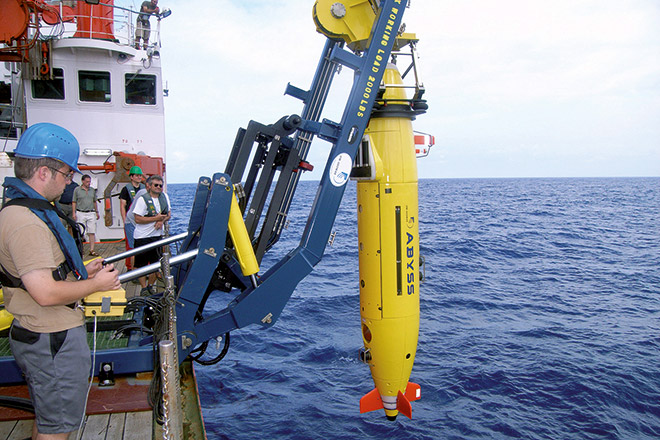