Sand, gravel and phosphate from the sea

The extraction of mineral resources from the sea is by no means a new activity. Many countries have in fact been extracting sand and gravel for decades. This loose rock is used to make concrete, as backfill on building sites and in harbours, and also as beach nourishment to protect coastlines. How much marine sand and gravel is effectively taken worldwide is difficult to estimate because the data is not collected centrally. What the available statistics do show, however, is that Europe is the largest producer of marine-dredged sand and gravel, with sand being the most sought-after product.
According to estimates published by the International Council for the Exploration of the Sea (ICES), the organization responsible for the North Atlantic marine habitat, 93.5 million cubic metres of sand were removed from European waters in 2012. That figure equates to approximately the volume of 37 Great Pyramids of Cheops. The Netherlands accounted for the major share of about 63 million cubic metres. No less than 37 million cubic metres were needed by that country alone to replenish the North Sea coastline and offshore islands to balance out the sand masses washed away by the autumn and winter storms in the North Sea. Some of the sand is used each year to expand the port of Rotterdam.
The extent of sand and gravel consumption by the Netherlands is highlighted by the fact that the USA uses only about 57 million cubic metres of marine sand each year. In that country, the material is almost exclusively utilized for the purposes of coastal protection and beach replenishment.

Europe’s second largest consumer of marine sand after the Netherlands is Great Britain. That nation used almost 12 million cubic metres in 2011, plus nearly 7 million cubic metres of gravel. Approximately 80 per cent of both products are used to manufacture concrete, particularly for construction work carried out in London and in southern parts of England.
No other nations regularly extract sand and gravel to such an extent. However, in individual cases, large amounts are indeed needed for building projects such as the expansion of Hong Kong airport and the port of Singapore.
What is more, despite the ready availability of desert sand, marine sand is also used to construct artificial islands such as the Palm Islands of Dubai. This is because the rounded grains of ocean sand are better for concrete production than the angular grains taken from the desert. Marine sand and gravel are used mainly where no suitable deposits can be found onshore. This is the case in both southern England and the Netherlands. However, because it is generally substantially more costly to remove them from the sea, onshore deposits tend to be preferred worldwide.
Sand and gravel are extracted by ships constructed specially for this purpose, which suck them from the ocean floor using a large pipe. This process is known as suction dredging. The pipes are up to 85 metres long and can have a diameter of up to 1 metre. As a rule, the dredging areas are around 3 kilometres long and several hundred metres wide. There are two different dredging processes. The first is static suction dredging during which the ship lies at anchor as it sucks up sand from a single spot. This produces pits of up to 10 metres in depth. The second process involves the ship pulling a suction pipe with a draghead behind it and slowly following a route through the dredging area. This method of material extraction removes a layer of sand 25 to 50 centimetres thick from the sea floor.
The extent of the damage and destruction that is inflicted upon marine habitats by the large-scale extraction of sand and gravel has long been a subject of heated discussion. The North Sea fishing industry, for instance, has voiced fears that fishing could be impacted negatively by suction dredging operations. Among other things, the critics of dredging have asserted that:

Since the start of the new millennium, therefore, a whole raft of biological studies has been carried out with the aim of assessing the impact of suction dredging on the marine environment. These investigations have shown that dredging does indeed have an impact, but have also revealed that such effects are limited to relatively small areas. An English study, for instance, proved that after 25 years of sand dredging, an area needs about 6 years to completely repopulate. In an area dredged for only a brief period or just once, the original conditions are already restored after 1 or 2 years.
A Dutch study even concluded that 2 years after dredging sand to expand the port of Rotterdam the fish biomass in the dredged area increased substantially. Why this is, is unclear. 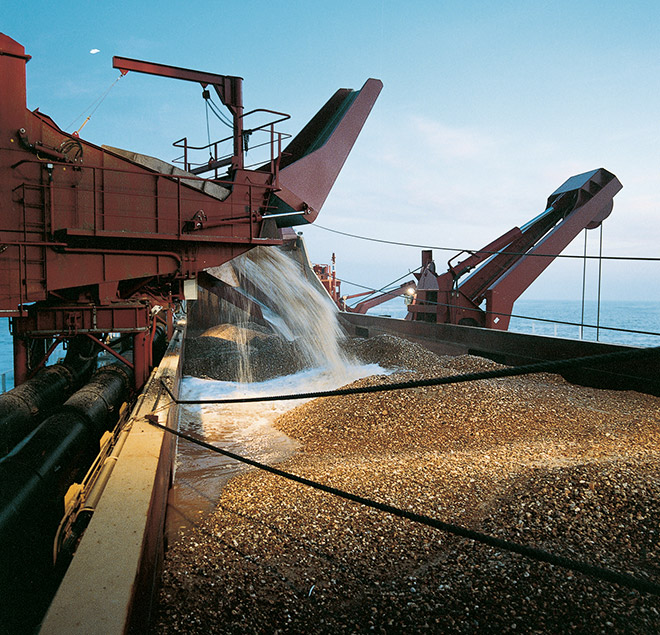 What is certain, however, is that extraction does change the composition of the seabed sediments. When gravel or coarse-grained sand is removed, the sites afterwards often fill with finer sand which is washed in by the current. Fine-grained areas attract different sea dwellers than coarse-grained areas. These changes can persist over many years. However, as relatively small areas covering only a few square kilometres are dredged, the studies conclude that there can be no question of major habitat change.
The conflict that erupted in Great Britain between the fisheries sector on the one side, and the sand and gravel industry on the other, was defused by awarding licences for marine areas in accordance with the Marine and Coastal Access Act 2010. Now, for the first time, the Act coordinates and regulates the maritime spatial planning of the waters off Great Britain and their use by fishing fleets, tourism operators, wind energy companies and the sand and gravel industry. By allocating specific areas for well-defined uses, it can be ensured that the associated activities remain far enough away from fish spawning grounds. This avoids a situation arising in which suspended sediments caused by dredging smother the eggs of herring and other species. 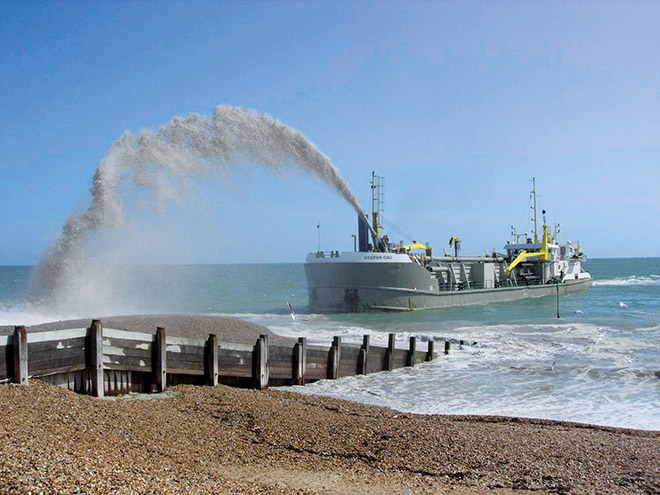 fig.2.9 > The sand-water combination is pumped from the ship onto the beach using the “rainbow method”. © Photo courtesy of the Eastern Solent Coastal Partnership, www.escp.org.uk

Some countries take a very critical view of the mining of sand and gravel. In South Africa for instance, dune sand is extracted for use in the construction industry. As dunes are a natural bulwark against the ocean surf critics are concerned that this activity could adversely affect the coastline. Fishermen in India are protesting against the removal of sand from beaches. They are concerned that fish stocks are being compromised by the suspended sediment being stirred up and that catches will dwindle as a result.
For more than 10 years now sand has been illegally removed from Moroccan beaches and sold to other countries for concrete manufacture. This has transformed some beach areas into lunar landscapes. The tourism industry fears that damage to its reputation and financial losses may follow.
Apart from sand and gravel, phosphate is another mineral resource which has the potential to be exploited from the sea on a grand scale. Phosphate is mainly used as a feedstock for fertilizer production. Massive quantities are mined in West Africa and Tunisia, from where it is exported to many different countries. The importation and long-haul sea transportation are relatively expensive for distant nations, which would consequently prefer to make use of the marine resources off their own coasts. There are thus plans to mine phosphate at Chatham Rise, a submarine ridge off the east coast of New Zealand. These plans are meeting with a storm of protest from conservationists who fear that important habitats on the sea floor could be destroyed. Proponents argue that the proposed mining area is extremely small compared to the area affected by bottom trawling.
Debate has begun in Namibia and South Africa, too, about the harvesting of marine phosphate. Fishermen in Namibia are concerned that mining off the coast of Walvis Bay could destroy the hake fishing grounds. Environmentalists in South Africa, for their part, assert that the areas earmarked for sea-floor mining will be adjacent to species-rich Vulnerable Marine Ecosystems (VMEs) meriting particular protection. They are demanding that in-depth environmental impact assessments should be carried out before any mining begins.