Methane rising up from the sediments is, to a large extent, consumed by microorganisms that live in the upper layers of the sea floor and in the water. Anaerobic bacteria – bacteria that can survive without oxygen – are active in the ocean floor. They process the methane with the help of sulphate (SO42-), thus producing hydrogen sulphide anions (HS-), hydrogen sulphide (H2S) and bicarbonate (HCO3-). The bicarbonate can react with calcium ions (Ca2+) to form lime, or calcium carbonate (CaCO3), which precipitates in the ocean floor.
Aerobic bacteria – which need oxygen – are active in seawater. Together with oxygen (O2) they convert methane (CH4) into carbon dioxide and water (H2O). The methane therefore slowly breaks down during its journey from the seabed up through the seawater. The greater the depth from which the methane rises, the farther it has to travel and the less methane reaches the upper water layers and the atmosphere. However, we should not forget that aerobic methane oxidation in particular can change the chemical composition of the seawater. Firstly, the reaction of the oxygen with methane reduces the oxygen concentration in the water. This can give rise to problems because many marine organisms cannot survive in oxygen-deficient areas. Secondly, the carbon dioxide reacts with seawater to form carbonic acid which causes acidification of the seawater.
The explosion at the Deepwater Horizon oil rig in the Gulf of Mexico in April 2010, however, showed that the impact of the altered marine chemistry is small-scale and tends to be minor. Apart from the oil, large volumes of methane were also released into the water surrounding the accident site. After the calamity scientists measured a reduction in the oxygen content in the vicinity of the platform. The changes were minimal, and no negative impact on marine life could be verified. Having said this, we cannot be certain that lower oxygen levels and acidification around methane sources would not stress marine animals, resulting in poor growth and reproduction rates. For example, seawater acidification around volcanic springs near the Mediterranean island of Ischia has impaired the ability of many marine organisms to form their shells. 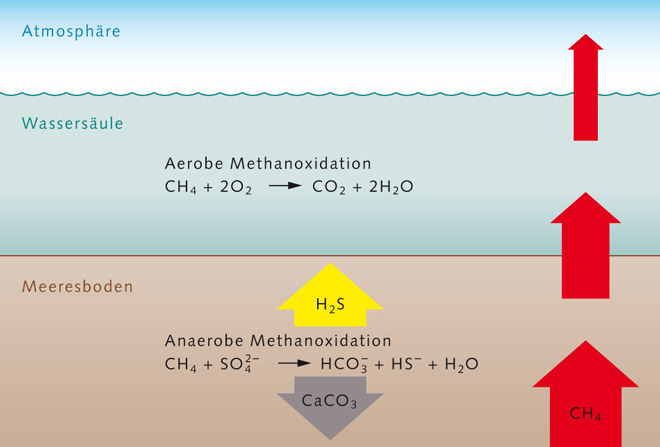