The very poor regulation and control of the oil industry in some countries nowadays are exemplified by the situation on the Atlantic coast between Angola and Côte d’Ivoire in Africa. There are major oil fields here, mainly in Angola and Nigeria. However, both these countries have failed to utilize the oil revenue in a manner which creates pros-perity for all.
The situation in Nigeria is catastrophic: here, oil production in the Niger Delta has fuelled ongoing armed conflicts and has polluted wetlands, mangrove forests and the habitats on which thousands of people depend. One reason for this disastrous situation is that the Nige-rian government does not share the benefits accruing from the oil industry equitably. It negotiates cooperation agreements with oil multinationals and issues production licences, receiving many billions of dollars in revenue from these arrangements every year. But although a formula for the distribution of revenues between the federal budget, the governments of the individual states and the local authorities exists, very little money flows back to the oil-producing regions. According to experts, this is due to a high level of corruption in the upper echelons of government. What’s more, under the 1978 Land Use Act, land where oil is found falls under the direct control of the state, and in most cases, no compensation is paid to communities or private owners. Among other things, this injustice results in pipelines being illegally tapped and large quantities of oil being bunkered and sold abroad, especially in neighbouring Benin, Côte d’Ivoire and Senegal. The tapping of pipelines is also polluting large areas of the Niger Delta. According to experts, the annual revenue from this illegal oil industry is an estimated one billion US dollars a year.

At present, various rebel groups are fighting for control of the illegal oil industry. The situation is also difficult because even before the oil boom began in Nigeria in the 1970s, conflicts had erupted between various ethnic groups, even escalating into civil war. These conflicts were fuelled by politicians who channelled the profits from oil to those groups which served their particular political interests. In some cases, politicians supplied the rebel groups with arms, worsening the conflicts. Nigeria’s oil wealth has led to an oil war. Although the multinationals are not directly involved in the hostilities, oil production in such politically unstable regions raises all manner of questions. Even the multinationals’ social engagement has often led to new conflicts in Nigeria. To the multinationals’ credit, they have attempted, of their own volition, to improve living conditions for local communities in the oil-producing regions through financial support and social engagement. But even here, conflicts have frequently arisen between communities receiving support and their neighbours who went away empty-handed. The oil companies bear a share of the responsibility for what is happening in the oil-producing countries, as became apparent in 2013, when the Anglo-Dutch company Shell faced legal action in a court in The Hague for the environmental damage caused in the Niger Delta. Between 2004 and 2007, there had been several attacks on pipelines in the Niger Delta, spilling large quantities of oil and pollut-ing villages, farmland and fish ponds. Farmers, fisherfolk and a Dutch environmental organization therefore took Shell to court. The court dealt with a total of five charges, with Shell being accused of having failed to provide adequate security for its pipelines. The court found Shell’s Nigerian subsidiary to be liable on one count: Shell had neglected its duty of care and had shown particular negligence. In 2006 and 2007, this has enabled sabotage to be committed in a very simple way by opening the valves on an oil well with an adjustable spanner. On the four other counts, however, the court ruled that because the pipelines were laid underground and were adequately secured, Shell was not liable.

There have been many other incidents similar to those dealt with in these legal proceedings. According to an independent assessment of the environmental impacts of oil contamination in the Niger Delta, commissioned by the United Nations Environment Programme (UNEP), there is massive environmental damage in the Niger Delta. The project team surveyed pipelines, oil wells and oil spill sites, and their report concludes that pollution is extensive. There is a particularly serious problem with toxic hydrocarbon pollution of soil and water. In 49 cases, hydrocarbons were found in soil down to depths of 5 metres, and in 41 cases, the hydrocarbon pollution had reached the ground-water. Furthermore, fishing has declined sharply in the region as fish stocks have decreased, presumably because of the pollution.
In Nigeria, around 15 per cent of oil is produced offshore in coastal waters, rather than onshore, and this is increasing. Although offshore oil production is more expensive, it is considered to be more secure, as the drilling rigs are less accessible to rebels and are therefore relatively well protected against attack. But even here, attacks have occurred. In 2008, rebels from one of Nigeria’s largest militant groups, the Movement for the Emancipation of the Niger Delta (MEND), attacked an offshore oil rig 120 km off the coast in a demonstration of seaborne power. Nonetheless, the expansion of the offshore oil industry, according to social scientists in Nigeria, could help to mitigate the problems facing the region and reduce the potential for conflict, for unlike on-shore oil production, communities are not directly impacted by the offshore industry, and pollution of soils and drinking water is avoided.
Unlike the situation in Nigeria, all Angola’s oil production takes place offshore, and the set of problems affecting the sector is different. But in Angola too, very few people share in the benefits of the country’s oil wealth, and the gap between rich and poor is very wide. 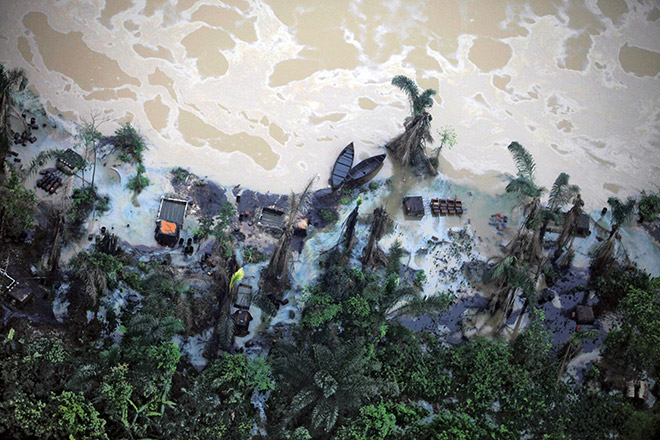 4.11 > In the Niger Delta, oil stolen from pipelines is processed in illegal refineries such as this one by the Imo River, causing additional water pollution. © Akintunde Akinleye/Reuters

The main oil-producing region is found in the coastal waters off the Angolan province of Cabinda, an exclave of Angola located in neighbouring Congo. And yet Cabinda is one of the country’s poorest re-gions, and apart from a few coastal roads, it has very little infrastructure. The Angolan capital Luanda, on the other hand, is the most expensive city in the world. In no other city are rents and living costs as high as they are here. Angola is now the largest oil-producing country in sub-Saharan Africa. Contracts are negotiated between the state-owned oil company Sonangol and multinationals. These production agreements contain formulae for the sharing of profits from oil production between the host country and the multinationals. However, the actual amount of profits is generally unclear, as the data published are invariably incomplete, incomprehensible or inconsistent. As is evident from the extreme contrast between rich and poor, the profits from Angola’s oil industry benefit only the elite.

Although experts applaud Angola for introducing stringent anti-corruption legislation and for taking action publicly to combat corruption, it is safe to assume that some of the oil revenue is being misappropriated at the top echelons of government. This is partly because Sonangol is not controlled or regulated by independent authorities. Angolan and international non-governmental organizations are therefore calling for more transparency and public debate in order to achieve more equitable distribution of profits and sharing of benefits.
Environmental pollution on a scale comparable with Nigeria has not occurred in Angola. However, in 1991, an explosion occurred on board the oil tanker ABT Summer off the Angolan coast, spilling its cargo of around 250,000 tonnes of oil and polluting the coastline. Fortunately, no major oil spills have occurred since then. Nonetheless, Angolan non-governmental organizations are critical of the ongoing pollution of coastal waters by oil discharged in effluent from the rigs, and estimate that more than 10 smaller oil spills occur every year.
A contentious issue is whether the decline of fish stocks off the coast is due to these oil spills, or whether overfishing has played a greater role.