Depth zones of the ocean

The ocean is divided into different depth zones. The epipelagic extends from the water surface down to a depth of 200 metres. The word comes from the Greek terms pélagos (open sea) and epí (upon). This upper layer, which is influenced by light, is especially productive because the primary producers (algae, cyanobacteria and seagrass) produce biomass here through photosynthesis. This primary production is the foundation of life in the sea. Below the epipelagic zone lies the mesopelagic, extending down to around 1000 metres (Gr.: mésos = middle). Below this, the bathypelagic zone encompasses depths from 1000 to 4000 metres (Gr.: bathýs = deep). Many deep-sea species live within this zone, including fish, crustaceans and snails. And even deeper, between 4000 and 6000 metres, lies the abyssopelagic (Gr.: ábyssos = bottomless), where the prevailing temperatures are near the freezing point. Even here specialized animal species can be found, including crustaceans. The deepest regions of the sea are called hadopelagic (Gr.: hades = underworld). The hadopelagic extends into the deep-sea trenches, down to a depth of 11,000 metres. The inhabitants of this deepest marine region include bristle worms. The ambient pressure here is around 1000 times greater than at the water surface. 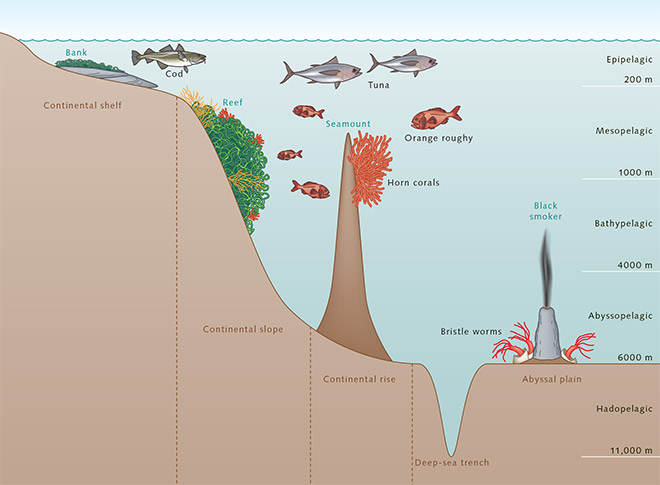 Fig. 3.13 > The depth zones in the ocean. Diverse habitats such as black smokers or cold-water coral reefs have formed in these zones. Where different species settle depends on the depth and structure of the sea floor among other factors. © maribus