The fish catch in international waters outside the EEZ is regulated by the Regional Fisheries Management Organizations (RFMOs) and their member countries. These members include not only the bordering states, but also countries that are heavily involved in fishing in a given marine region. For example, China and Japan also fish in the northeast Atlantic. This is consistent with international maritime law and completely legitimate according to the principle of freedom of access to the high seas. The European countries, in turn, are represented in numerous RFMOs through the European Commission. Annual negotiations are held to determine which countries are allowed to catch how much of a species. Almost all commercially relevant fish species are covered by the RFMOs.
There are specific RFMOs for the management of certain fish species, for example, salmon and pollock. The catch of highly migratory species, above all tuna, is also regulated by special RFMOs. In these, the countries that carry out tuna fishing are represented as are the bordering and coastal states whose Exclusive Economic Zones are adjacent to the fishing ground. This also takes into consideration the fact that tuna, in contrast to most fish species, do not live in geographically defined stocks. Sharks are covered, in part, as a sub-group of the ICCAT.
There are only a few remaining marine regions today that are not supervised by RFMOs, or that are insufficiently supervised due to a political situation. These include the Indian Ocean around the Horn of Africa. Although the area is covered by the IOTC, fishing cannot be regulated due to piracy. Illegal, unreported and unregulated fishing (IUU fishing) is common there. The Arctic, on the other hand, is not yet managed by RFMOs because fishing there is rare. With the growing worldwide demand for fish, however, this region could become more interesting for fisheries in the future. 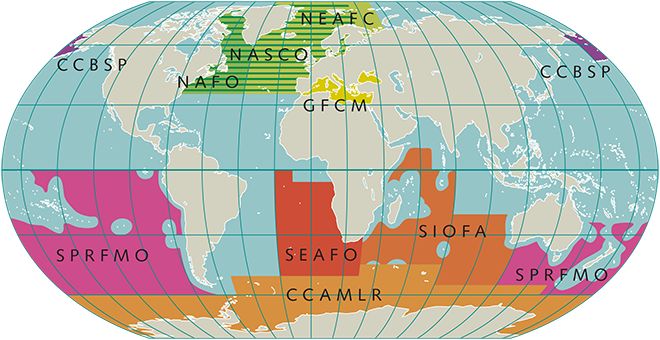 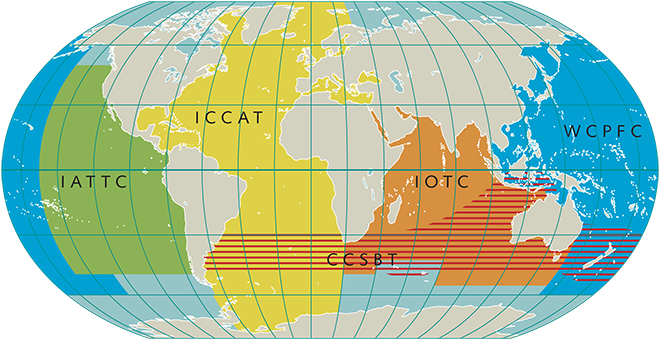