Mauritania, Senegal and the difficult path towards good fisheries management

The waters off West Africa are among the most heavily fished in the world and the irresponsible approach to fishing there is heavily criticized. Mauritania is a good example of how difficult it is to move towards sound and sustainable fisheries management. Mauritania is not a traditional fishing nation, so fish is not a staple food here. Instead of engaging in fishing activity itself, Mauritania has, for many years, granted licences to foreign fishing companies – an important source of income for this desert state. However, the licences have until now been granted solely on the basis of vessel size (tonnage) – a very imprecise measure for targeted management of fish stocks. Mauritania, with support from various other nations and development projects, therefore decided to establish a more effective fisheries management system. In 2006, it adopted its first management plan, which focused on octopus fisheries. Then on 1 August 2012, a comprehensive new fisheries protocol entered into force on a provisional basis with the aim of regulating many other fisheries as well. Among other things, the protocol sets precise quotas for each species and defines the number of ships and maximum catch per species. This type of arrangement makes it much easier to manage fishing activity. The licence fees were also increased. In order to monitor compliance with the various quotas, catches of demersal fish (bottom-living species including shrimp and deep-water crab) must be landed in Mauritania’s only fishing port, namely Nouadhibou. Pelagic fish, of which up to 1 million tonnes are caught off Mauritania annually, cannot be landed here due to capacity limitations, however. The transshipment of the catches from the trawlers to the large refrigerated transport ships must therefore take place just outside the port of Nouadhibou so that random checks can be carried out at any time. 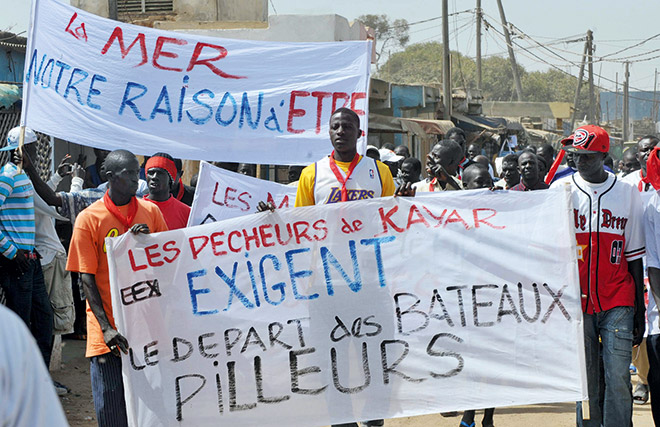 5.15 > Worried about their livelihoods, Senegalese fishermen held protests in March 2012. The President in office at the time intended to sell more fisheries licences to foreign fishing companies. © Seyllou/AFP/Getty Images

ships must therefore take place just outside the port of Nouadhibou so that random checks can be carried out at any time. With the new fisheries protocol, an effective management regime is available – in theory. However, it is currently being boycotted by most owners of the foreign fishing fleets on the grounds that it is too stringent. These are just some of their complaints:

As a result of the boycott, virtually no new licences have been purchased and many international fishing companies have withdrawn their vessels from Mauritanian waters. As an expression of solidarity with the Spanish octopus fishermen, for example, the Spanish shrimp fishermen have also pulled out. Only the French tuna fishermen and the Spanish hake fishermen have acquired licences. This is resulting in a substantial loss in licence revenue for Mauritania. There is a strong possibility that Mauritania will bow to international pressure and amend the protocol in the near future. This highlights a wider problem in Mauritania, namely that sound rules and good management regimes are often implemented in a half-hearted manner by the Government, or are circumvented by means of exemptions. If in doubt, the Government invariably opts to make a quick profit instead of protecting fish stocks. 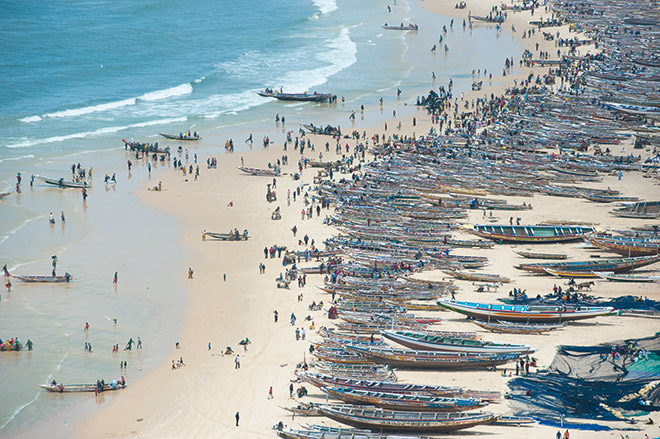 5.16 > Artisanal fishing is pursued very intensively in some areas, as is apparent from the large number of pirogues moored on this beach in Senegal. © Pierre Gleizes/Greenpeace

As well as the difficulties of establishing a sound management regime, a further sobering fact is that Mauritania is currently experiencing setbacks with regard to its fisheries control system. In order to curb illegal fishing far out in the EEZ, but also to monitor vessels operating legally, Mauritania has, over the past 10 years, established a fisheries inspectorate with international assistance. Monitoring vessels were deployed to patrol the 200 nautical mile zone and the country also has an aircraft for this purpose. Radar systems were installed to monitor the coastal areas. These measures have done much to curb illegal fishing. But now, aid organizations are lamenting the growing disinterest on the part of the Government. The surveillance aircraft has not been in operation for some time, and the fisheries inspectorate’s vessels are generally in such a poor state that they cannot be operated safely. The only vessel which is still seaworthy is often seen in dock, tied up by the quay, due to a shortage of fuel. When it does take to the seas, its surveillance activities are generally confined to coastal waters. As a consequence of this situation, the fisheries inspectorate’s deterrent effect has recently decreased.
Unlike its neighbour Mauritania, Senegal has a long tradition of fishing. The Senegalese have for generations relied on long narrow wooden boats, around 14 metres in length, known as pirogues, which can carry more than 10 tonnes of fish. As Senegal is a much more impoverished country than Mauritania, however, it cannot afford a fisheries inspectorate. Foreign fleets from China, Russia and even Spain, operating under flags of convenience, are therefore engaged in illegal fishing on a massive scale in Senegal’s waters. What’s more, as the Government under former President Abdoulaye Wade allocated a very large number of fishing licences to foreign companies, the Senegalese people have been complaining for years that their once abundant fishing grounds have been ravaged. When Wade was about to sell even more licences to Russian trawlers in spring 2012, the Senegalese people took to the streets in protest. Already heavily criticized for his political power games, Wade lost the presidential election. The new President, Macky Sall, has now cancelled 29 of the 44 fisheries licences allocated during Wade’s presidency – thus honouring one of his key election pledges.
This example highlights the close bond felt by people in countries with a strong tradition of fishing towards this natural resource. It is also clear that it is essential to take their concerns and interests seriously and to involve them in fisheries management. It is hoped that the new Government of Senegal will take this to heart and continue with its vigorous measures to combat what has been, in effect, the sell-off of the country’s fishing grounds.