An end to discards?

Fishing quotas are generally allocated for individual fish stocks. In fisheries in which individual species can be caught on a targeted basis – in the main, these are schooling fish such as herring or mackerel – this works well. Often, however, various species of fish end up in the net. Fishery experts call this a mixed fishery. In the North Sea sole fishery, for example, large quantities of plaice, another flatfish species, are caught as bycatch. This causes problems because fishermen can only land the species for which they have been allocated a quota. All the other fish and marine fauna caught as bycatch are dumped overboard. Most of the discards are already dead when they go back into the water. This discarding of bycatch has been practised for decades. The European Union (EU) is keen to prohibit the practice of discarding under its new Common Fisheries Policy (CFP). A frequent criticism is that it is almost impossible to monitor compliance with a ban. For that reason, various measures and strategies are currently being discussed to reduce bycatch on a general basis in future and make monitoring more effective. They include:

The new Common Fisheries Policy (CFP) will probably allow a transitional period of several years for the introduction of the new technology. Based on the current stage of the discussions, it seems likely that the possibility of counting non-quota species against the quota will also be introduced on a progressive basis. The aim is to carry out fewer checks and compel fishermen to take more responsibility – in other words, to increase their ownership of the process. On the Faroe Islands in the North Atlantic, an attempt has been made to solve the problem of discards as follows. Instead of allocating fishing quotas, restrictions are imposed on fishing effort. The fishermen can only spend a limited number of days at sea. However, they can land their entire catch, so there is no need for them to discard any fish. This approach does not solve the problem of high-grading, however; this term describes fishermen’s practice of sorting out the most valuable components of the catch, such as the largest and heaviest individuals from a given species, because large fish bring in more money per kg of body weight. Smaller or damaged fish are then dumped overboard. This is a waste of resources. High-grading is already banned in the EU, Iceland and Norway but is still practised despite the bans, so properly functioning controls are vital. 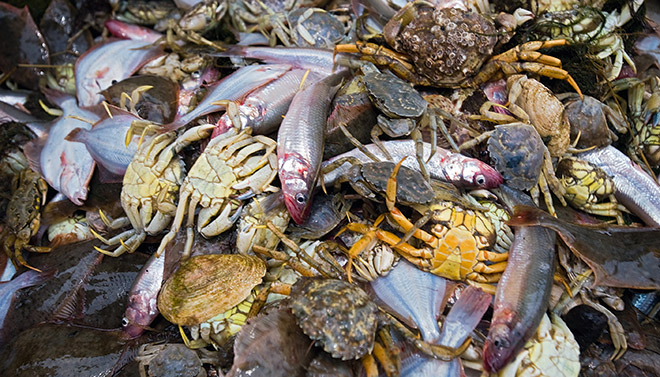 5.11 > In the North Sea, a typical bycatch is likely to include small flatfish and a great many crabs, such as shore crab (Carcinus maenas). © Martin Kirchner/laif