When things get too tight for the offspring

When the spawning biomass – the number of sexually mature parent fish – of a stock increases, then the number of juveniles or so-called recruits swells accordingly, but only up to a certain limit. Even if the spawning biomass continues to increase, the number of recruits remains at a certain level. The habitat has reached its maximum carrying capacity for offspring. The reason for this is that the more juveniles there are, the greater the competition for food. Many die. The habitat can therefore only support a certain number of offspring. In theory, this maximum carrying capacity stays the same for a long period of time. In reality, however, it fluctuates from year to year, mainly depending on how many predators are in the area and how much food is available. The amount of food, on the other hand, depends on the environmental conditions. The findings of scientific fish counts show that recruit numbers fluctuate accordingly. The figure below shows measurements taken over several years, which indicate that certain spawning masses are quite capable of producing different numbers of recruits (blue dots). In this respect, the maximum carrying capacity for offspring can be considered a type of median value. On the other hand, the point at which the spawning biomass is so reduced by fishing activity that the number of recruits falls below this maximum carrying capacity is known as the limit biomass (BLIM). 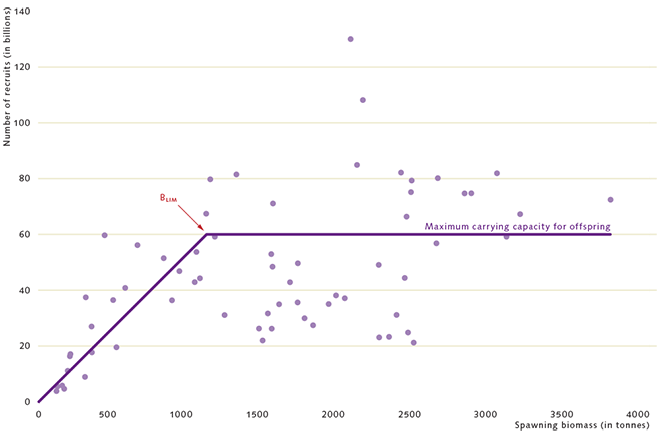