The impact of aquaculture on marine habitats

If aquaculture is operated indiscriminately, environmental damage is often the consequence, especially in coastal areas. This can occur with mussel farming or fish farming in cages, where there is direct contact between the aquatic animals and the surrounding waters. In the past, farmed fish such as European Atlantic salmon in North America often escaped from their cages. In time they transferred diseases to the wild populations on the US coast. If the alien species feel at home in their new environment they can breed prolifically and in some cases completely crowd out indigenous species. Cultivation of the Pacific oyster was abandoned some decades ago by mussel farmers in Holland and off the North Sea island of Sylt. The species has become a problem, spreading over the entire mudflat area of the Wadden Sea – a shallow coastal sea bordering the North Sea – and overrunning the blue mussel, the staple food of the eider duck and the oystercatcher. The banks of mussels have now become inaccessible to the birds. “Invasive alien species” is the term given by experts to these non-native species. Regulations in Europe now govern the introduction of new species, prescribing a long period of quarantine. Many areas of Asia, however, do not take the problem of invasive alien species nearly so seriously. For this reason experts are calling for in-depth case-by-case assessments of the potential of species becoming prevalent in a new habitat and changing the ecosystem. Another problem can be the removal of juvenile fish or fish larvae from their natural habitat. The European eel, for example, migrates from the rivers of Europe to spawn in the Sargasso Sea in the western Atlantic. As this species cannot be bred in captivity, juvenile eels must be caught in the wild for breeding purposes. The practice places extra pressure on wild eel stocks. Happily, however, increased public pressure has virtually put a stop to mangrove clearances for new fish farms in the major river estuaries of South East Asia. The mangroves also proved to be unsuitable for the industry. Like the Wadden Sea mudflats, the sediment in mangrove forests contains nitrogen compounds, in particular toxic hydrogen sulphide. For several reasons this environment proved to be inappropriate for farming. According to development aid agencies, aquaculture facilities based on brackish water are no longer being established in the mangroves in Thailand, but in areas further inland. 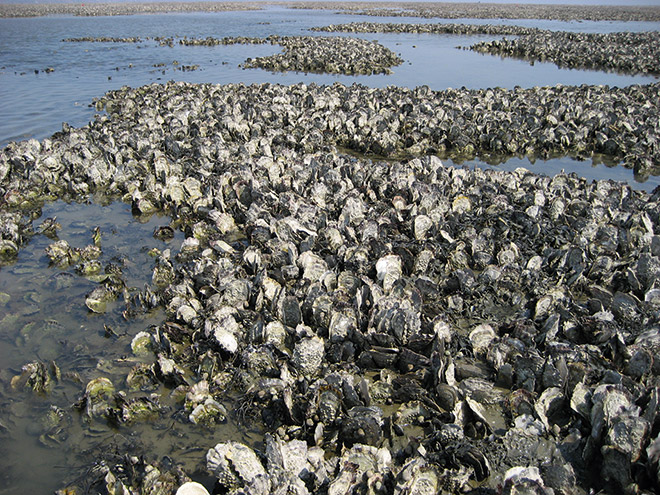 Abb. 4.10 > The Pacific oyster has colonized the entire Wadden Sea. It overruns the banks of blue mussels that are a vital source of food for seabirds such as eider ducks. It was originally introduced by mussel farmers in Holland and on the North Sea island of Sylt. © Achim Wehrmann/dapd/ddp images