The damage caused to seabirds’ plumage is probably the most notorious effect of oil pollution. As a result of oil contamination, the plumage can no longer perform its vital functions of repelling water and providing thermal insulation. If much of the plumage is covered in oil, the bird will lose body heat and die. A similar effect can be observed when marine mammals’ fur is coated with oil. The fur can no longer insulate the mammal from cold air and water, which weakens it and may even cause death in extreme cases. In plants, oil contamination of shoots interrupts gas transport from the leaves to the roots, which causes the plant to die. Filter-feeders such as mussels and organisms such as sea snails and worms which take up nutrients from the sea floor often ingest oil along with their food. The toxic hydrocarbons can then be passed along the food chain when the contaminated mussels are eaten by other animals. Birds and mammals often ingest oil when they attempt to clean their oil-coated feathers or fur. Soft-skinned creatures such as fish and many invertebrates mainly absorb petroleum hydrocarbons through the skin and especially through the gills, which process large quantities of water.
Petroleum hydrocarbons have many different effects according to the species. In many fauna, they mainly impair growth and metabolic activity. Studies show that lobsters and lug worms react by reducing their nutrient intake. In mussels and fish, studies show that growth is impaired by oil pollution. Researchers have repeatedly observed behavioural changes in response to exposure to oil. Seals are reported to be extremely lethargic, which scientists attribute to nerve damage caused by the intake of volatile petroleum hydrocarbons during respiration in the immediate aftermath of oil spills.
Reproduction of numerous marine organisms is also adversely affected. Poisoning by oil can cause genetic damage: in salmon, for example, increased ovum mortality was observed after an oil spill. In herring, numerous freshly hatched progeny were malformed. Scientists have also reported that the concentration of specific hydrocarbons in sediment increases the number of genetic mutations in mangrove trees. Often, toxic oil constituents can also damage the reproductive organs of marine organisms: an increase in the number of sterile shellfish, for example, was observed during the year following an oil spill. In the case of corals, scientists reported that the number of progeny decreases in chronically oil-polluted areas. Furthermore, many marine fauna lose their sense of direction, as many of them use very fine concentrations of certain substances as a means of finding their way around their environment and identifying prey, predators or partners for reproduction.
These natural substances are biogenic hydrocarbons whose molecular structure is similar to some hydrocarbons contained in crude oil. If large quantities of the alien hydrocarbons enter the water during an oil spill, the animals find it impossible to detect the natural substances, making it far more difficult for them to find food or identify a breeding partner. 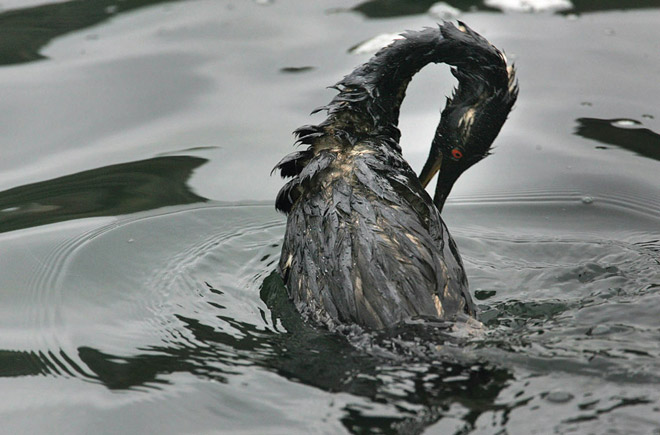 4.16 > In San Francisco Bay, a stricken seabird attempts to clean oil from its plumage following an oil spill from the Cosco Busan container ship after it collided with a tower of a bridge in November 2007. Accidents such as this contribute to the chronic oil pollution of the seas. © Frederic Larson/San Francisco Chronicle/Corbis

We use cookies to ensure that we give you the best experience on our website. If you continue to use this site we will assume that you are happy with it.OkRead more