Fertilizing the ocean with iron

Iron is a crucial nutrient for plants and the second most abundant chemical element on Earth, although the greatest portion by far is locked in the Earth’s core. Many regions have sufficient iron for plants. In large regions of the ocean, however, iron is so scarce that the growth of single-celled algae is limited by its absence. Iron-­limitation regions include the tropical eastern Pacific and parts of the North Pacific, as well as the entire Southern Ocean. These ocean regions are rich in the primary nutrients (macronutrients) nitrate and phosphate. The iron, however, which plants require only in very small amounts (micronutrients), is missing. Scientists refer to these marine regions as HNLC regions (high nutrient, low chlorophyll) because algal growth here is restricted and the amount of the plant pigment chlorophyll is reduced accordingly. Research using fertilization experiments has shown that plant growth in all of these regions can be stimulated by fertilizing the water with iron. Because plants assimilate carbon, carbon dioxide from the atmosphere is thus converted to biomass, at least for the short term.

Iron fertilization is a completely natural phenomenon. For exam­ple, iron-rich dust from deserts is blown to the sea by the wind. Iron also enters the oceans with the meltwater of icebergs or by contact of the water with iron-rich sediments on the sea floor. It is presumed that different wind patterns and a dryer atmosphere during the last ice age led to a significantly higher input of iron into the Southern Ocean. This could, at least in part, explain the considerably lower atmospheric CO2 levels during the last ice age. Accordingly, modern modelling simulations indicate that large-scale iron fertilization of the oceans could decrease the present atmospheric CO2 levels by around 30 ppm (parts per million). By comparison, human activities have increased the atmospheric CO2 levels from around 280 ppm to a present-day value of 390 ppm.

Marine algae assimilate between a thousand and a million times less iron than carbon. Thus even very low quantities of iron are ­sufficient to stimulate the uptake of large amounts of carbon dioxide in plants. Under favourable conditions large amounts of CO2 can be converted with relatively little iron. This raises the obvious idea of fertilizing the oceans on a large scale and reducing the CO2 concentrations in the atmosphere by storage in marine organisms (sequestration). When the algae die, however, and sink to the bottom and are digested by animals or broken down by microorganisms, the carbon dioxide is released again. In order to evaluate whether the fixed carbon dioxide actually remains in the ocean, the depth at which the biomass produced by iron fertilization is broken down and carbon dioxide is released must be known, because this determines its ­spatial and temporal distance from the atmosphere. Normally, 60 to 90 per cent of the biomass gets broken down in the surface water, which is in contact with the atmosphere. So this portion of the biomass does not represent a contribution to sequestration. Even if the breakdown occurs at great depths, the CO2 will be released into the atmosphere within a few hundred to thousand years because of the global ocean circulation.

There are other reasons why iron fertilization is so controversial. Some scientists are concerned that iron input will disturb the nutrient budget in other regions. Because the macronutrients in the surface water are consumed by increased algal growth, it is possible that nutrient supply to other downstream ocean regions will be deficient. Algal production in those areas would decrease, counteracting the CO2 sequestration in the fertilized areas. Such an effect would be expected, for example, in the tropical Pacific, but not in the Southern Ocean where the surface water, as a rule, only remains at the sea surface for a relatively short time, and quickly sinks again before the macronutrients are depleted. Because these water masses then remain below the surface for hundreds of years, the Southern Ocean appears to be the most suitable for CO2 sequestration. Scientists are concerned that iron fertilization could have undesirable side effects. It is possible that iron fertilization could contribute to local ocean acidification due to the increased decay of organic material and thus greater carbon dioxide input into the deeper water layers. Furthermore, the decay of additional biomass created by fertilization would consume more oxygen, which is required by fish and other animals. The direct effects of reduced oxygen levels on organisms in the relatively well-oxygenated Southern Ocean would presumably be very minor. But the possibility that reduced oxygen levels could have long-range effects and exacerbate the situation in the existing low-oxygen zones in other areas of the world ocean cannot be ruled out. The possible consequences of iron fertilization on species diversity and the marine food chain have not yet been studied over time frames beyond the few weeks of the iron fertilization experiments. Before iron fertilization can be established as a possible procedure for CO2 sequestration, a clear plan for observing and recording the possible side effects must first be formulated. 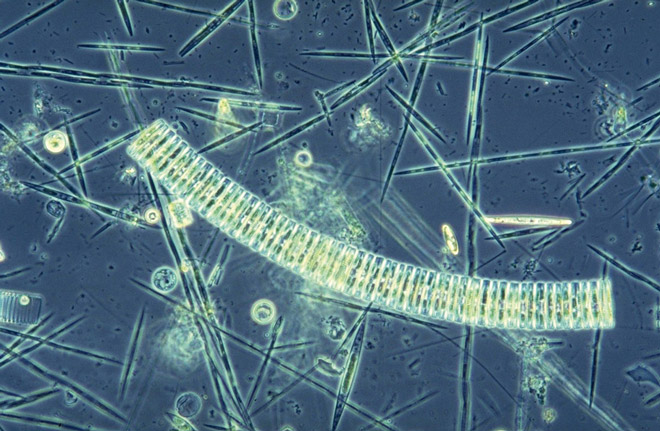 2.2 > Iron is a crucial nutrient for algae, and it is scarce in many ocean regions, which inhibits algal growth. If the water is fertilized with iron there is a rapid increase in algae. Microscopic investigations of ­water samples taken by the research vessel “Polarstern” clearly show that ­algae in this iron-poor region proliferate quickly after iron fertilization. Around three weeks after fertilization the marine algal community was dominated by elongate, hard-shelled diatoms. © dpa Picture-Alliance/DB Philipp Assmy/Awi