In summary, the reaction of carbon dioxide in seawater proceeds as follows: First the carbon dioxide reacts with water to form carbonic acid. This then reacts with carbonate ions and forms bicarbonate. Over the long term, ocean acidification leads to a decrease in the concentration of carbonate ions in seawater. A 50 per cent decline of the levels is predicted, for example, if there is a drop in pH levels of 0.4 units. This would be fatal. Because carbonate ions together with calcium ions (als CaCO3) form the basic building blocks of carbonate skeletons and shells, this decline would have a direct effect on the ability of many marine organisms to produce biogenic carbonate. In extreme cases this can even lead to the dissolution of existing carbonate shells, skeletons and other structures.

2.7 > Studies of the coral Oculina patagonia show that organisms with carbonate shells react sensitively to acidification of the water. Picture a shows a coral colony in its normal state. The animals live retracted within their carbonate exoskeleton (yellowish). In acidic water (b) the carbonate skeleton degenerates. The animals take on an elongated polyp form. Their small tentacles, which they use to grab nutrient particles in the water, are clearly visible. Only when the animals are transferred to water with natural pH values do they start to build their protective skeletons again (c). © Avinoam Briestien

Many marine organisms have already been studied to find out how acidification affects carbonate formation. The best-known exam­ples are the warm-water corals, whose skeletons are particularly threatened by the drop in pH values. Scientific studies suggest that carbon dioxide levels could be reached by the middle of this century at which a net growth (i.e. the organisms form more carbonate than is dissolved in the water), and thus the successful formation of reefs, will hardly be possible. In other invertebrates species, such as mussels, sea urchins and starfish, a decrease in calcification rates due to CO2 has also been observed. For many of these invertebrates not only carbonate production, but also the growth rate of the animal was affected. In contrast, for more active animal groups such as fish, salmon, and the cephalopod mollusc Sepia officinalis, no evidence could be found as to know that the carbon dioxide content in the seawater had an impact on growth rates. In order to draw accurate conclusions about how the carbon dioxide increase in the water affects marine organisms, further studies are therefore necessary. 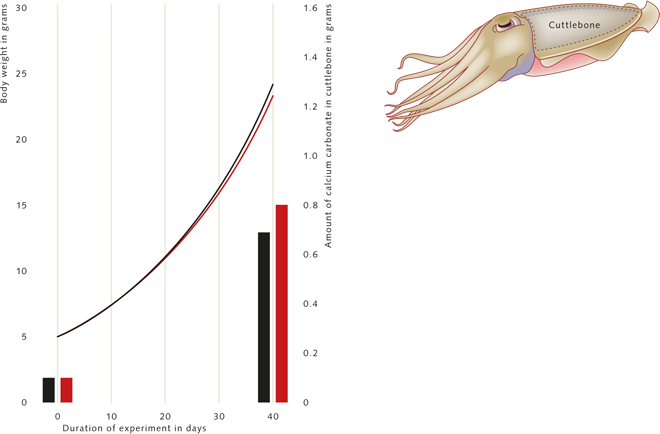 2.8 > Active and rapidly moving animals like the cephalopod mollusc (cuttlefish) Sepia officinalis are apparently less affected by acidification of the water. The total weight of young animals increased over a period of 40 days in acidic seawater (red line) just as robustly as in water with a normal pH and CO2 content (black line). The growth rate of the calcareous shield, the cuttlebone, also proceeded at very high rates (see the red and black bars in the diagram). The amount of calcium carbonate (CaCO3) incorporated in the cuttlebone is used as a measure here. The schematic illustration of the cephalopod shows the position of the cuttlebone on the animal. © maribus (after Gutowska et al., 2008)