More than the sum of its parts – the holobiont

The healthy microbial fauna of human beings and animals is highly diverse. The genetic information contained in all these microorganisms is much greater than that in humans alone. For this reason we can regard the human body, together with all the species inhabiting it, as a rich ecosystem of microbes, single-celled organisms, and other organisms – as a super-organism, a holobiont. Some scientists argue that the microbiota is essential, not only to the immediate life of the host, but also to the host’s evolution. This hypothesis implies that the holobiont, including all the microbes – not the human being or animal alone – should be regarded as a unit of evolution. We still have no idea of how the parts of this super-organism interact with each other, or how they influence health. We need to learn how the organisms cohabiting in the super-organism interact at a molecular level. How have the crucial genes of the many different species of the holobiont collectively evolved? How do the microorganisms ultimately influence the biology of their hosts, and how do the hosts influence the colonizing microbes?
How does the holobiont function? This is one of the most difficult questions to answer. Cnidarians and their efficient epithelial defence systems appear to be valuable objects of study in the effort to tackle this question. The reason is that these simple organisms contain many old genes that no longer exist in higher animals such as the fruit fly Drosophila melanogaster or the roundworm Caenorhabditis elegans, which have already been studied extensively by geneticists. If we wish to understand primary metabolic processes and the principles of immune response, cnidarians would therefore be the creatures of choice. It is also interesting to note that the microbial community colonizing the freshwater polyp Hydra are extremely complex and yet exactly tailored to Hydra. They clearly differ from the microbes living in the surrounding waters. Each species of Hydra has its own microbial menu, which is very stable and scarcely changes. The microbial fauna very likely takes over a range of metabolic functions for the host. Disturbing the balance between Hydra and its colonizing microbes appears to pave the way for disease. Studying host-microbe interactions in Hydra is of fundamental interest to researchers because it helps them understand the molecular language between host and microbes in the collective ancestor of all mammals, and thus to unravel the causes of human disease. 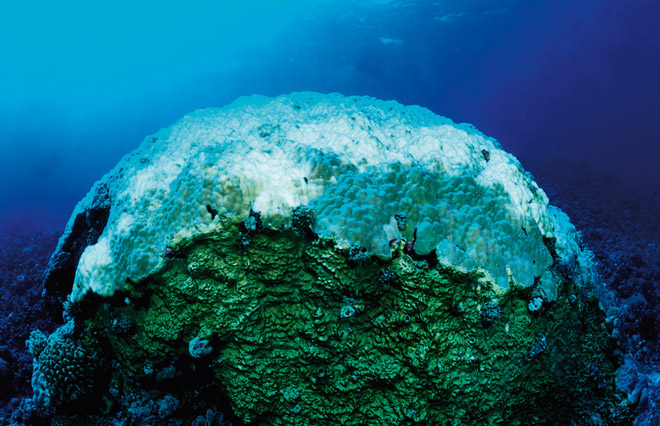 9.12 > Single-celled algae live in a symbiotic relationship with corals, feeding them with the byproducts of their photosynthesis. When these algae die off, the corals turn white, a process called coral bleaching. One cause may be an abnormal change in bacterial growth. © R. Dirscherl/blickwinkel