The fight against antibiotic resistance

The number of antibiotic-resistant bacteria has increased dramatically over the past 10 years. People who become infected with such bacteria can be extremely difficult to treat as scarcely any medication will help. Highly virulent is the methicillin-resistant Staphylococcus aureus (MRSA), a widespread bacterial strain resistant to the classic antibiotic methicillin, which has been prescribed for 50 years. The strains known as Enterococcus faecium and Enterococcus faecalis, resistant to the established substance vancomycin, are also problematic. Both types of bacteria are found in the healthy intestinal flora of humans, but pathogenic (disease-causing) varieties also exist. Virtually no antibiotic is effective against these bacteria. It is quite conceivable that the answer to this problem may be found in marine substances. For instance, cnidarians – a phylum of organisms that include jellyfish and are found both in seawater and freshwater – appear to be a very rich source of antimicrobial substances that specifically target certain bacteria. One of these substances is hydramacin, a peptide derived from the polyp Hydra, a tiny cnidarian armed with tentacles. Hydramacin kills off a range of germs that are resistant to penicillin – including certain strains of Escherichia coli, intestinal bacteria, as well as Klebsiella oxytoca and Klebsiella pneumonia, bacteria that inhabit the gastro-intestinal tract and can trigger diseases such as pneumonia and septicaemia (blood poisoning). As bacteria can scarcely develop a resistance to hydramacin as they can to conventional antibiotics, it is currently seen as a promising model organism for a new generation of antibiotics. Cnidarians are so interesting that their tissue has now been systematically tested for novel antibiotics that can kill multi-resistant bacteria. This process has yielded another antimicrobial peptide, arminin, which has been used to produce a synthetic molecule. The resultant molecule is potent against many of the pathogens mentioned here. But that‘s not all Hydra can do: Hydra’s immune system also contains a serine protease inhibitor, which has proved highly effective against Staphylococcus aureus. This substance inhibits serine proteases, proteins that control essential metabolic processes such as blood clotting. The discovery of this antimicrobial serine protease inhibitor in the Hydra polyp shows that evolution has developed different ways for organisms to defend themselves against bacteria. It also gives credibility to the assumption that substances extracted from marine animals can be turned into new classes of highly-efficient anti-staphylococcus antibiotics. 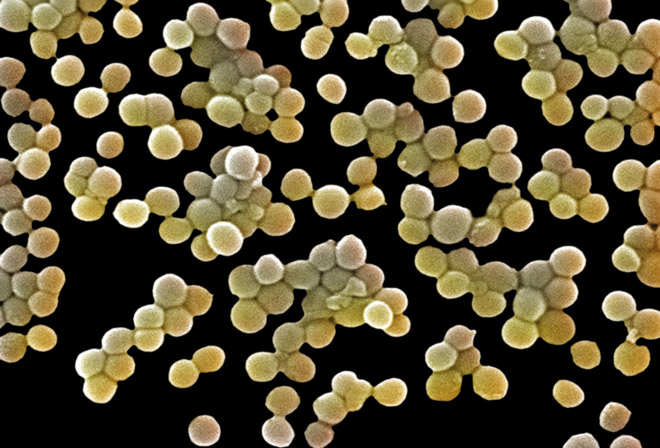 9.9 > Over time the iridescent gold-coloured Staphylococcus aureus bacteria have developed a resistance to the classic antibiotic methicillin. Infections with these bacteria are extremely difficult to treat. © YourPhotoToday/Phanie