The protection of marine organisms is regulated not only by UNCLOS, but also by international environmental law and legislation adopted at national and European level. In its articles on the Exclusive Economic Zone (EEZ), UNCLOS contains numerous provisions on the management of fish stocks, and these provisions have been further elaborated in a number of more recent international agreements (Chapter 6). The same applies to the protection of marine mammals, a topic addressed as early as 1946 by the International Convention for the Regulation of Whaling, which is still in force today. Originally, the management of stocks of large whales was the key focus of attention, but following the almost complete collapse of commercially significant whale populations in the 1970s and 1980s, the states parties shifted the focus of the Convention towards species conservation by imposing a comprehensive moratorium on commercial whaling. The International Whaling Commission was established at the same time. For some years now, its annual meetings have been dominated by heated arguments between those countries which are in favour of a resumption of commercial whaling (mainly Japan) and the majority of other countries which are strictly opposed to whaling. At present, Japan circumvents the moratorium by invoking a clause in the Convention which authorizes the killing of whales for purposes of scientific research. However, as the whales killed are in fact utilized for commercial purposes, most experts in international law take the view that Japan’s conduct is an abuse of the law. It is still unclear how the stalemate at international level between those in favour of whaling and those opposed to it can be resolved. From an economic perspective, whaling is a loss-making business, even in Japan. There is no doubt, however, that supporters of whaling are extremely dissatisfied with the work of the Commission, so they may continue to ignore the moratorium in future. A possible way out of the crisis would be a cautious easing of the moratorium. One option could be to agree a small catch quota for minke whales, which – in view of the positive development of stocks of this species – could be justified on ecological grounds. The prerequisite, however, would be stringent controls of whaling, including the presence of foreign inspectors on board the whaling vessels. A very limited resumption of commercial whaling could offer Japan a way out of illegality. But is this ethical? World opinion remains divided.

The harbour porpoise (Phocoena phocoena) is the only native species of cetacean inhabiting the North and Baltic Seas. In the German EEZ, harbour porpoises are found mainly at the Sylt Outer Reef, where the number of mother and calf pairs is particularly high, indicating that this area is important for the species’ reproduction. The intensive use of the German EEZ is having a major impact on harbour porpoise stocks. Fishing is a particularly relevant factor here as it reduces the porpoises’ food sources. In other cases, harbour porpoises die as bycatch in fishing nets. Underwater noise pollution, caused for example by offshore structures such as wind turbines, can drive harbour porpoises off their ranges and can also cause direct damage to the animals’ health. Pollution, too, can affect the health status of porpoise in various ways. Current legislation therefore aims primarily to make economically significant human activity in and on the seas more ecologically sustainable, with a view to protecting and preserving the harbour porpoise. 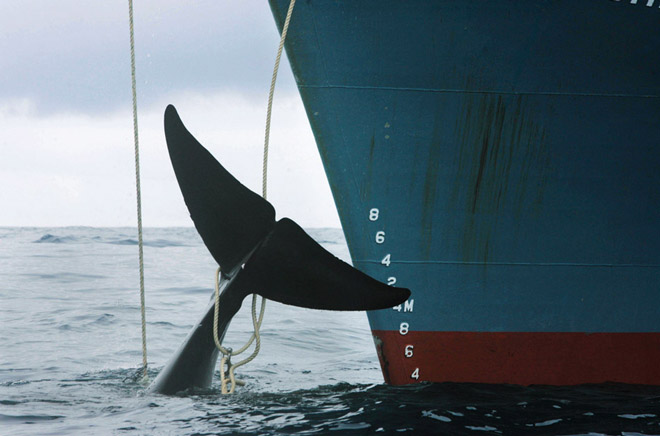 10.4 > Whereas most countries have agreed to protect whales, Japan is continuing to hunt them, as seen here in the South Pacific. The Japanese invoke a clause in the whaling moratorium which allows the killing of whales for scientific research purposes. Ultimately, however, their underlying interests are commercial. © Rex Features LTD/action press

The Agreement on the Conservation of Small Cetaceans of the Baltic, North East Atlantic, Irish and North Seas (ASCOBANS), for example, is significant here. However, in internal waters, the territorial sea and the EEZ, it is the nature conservation legislation adopted at the national level which is primarily relevant. Furthermore, in European waters, the legislation on species and habitat conservation introduced by the institutions of the European Union (EU) plays a key role. The EU’s Habitats Directive, for example, covers the EU member states’ internal waters and territorial sea, the EEZ and the continental shelf. This Directive aims to create a coherent European network of protected areas, known as “Natura 2000”, as a key instrument to preserve European species diversity. The Directive requires protected sites to include habitats of specific species, one of which is the harbour porpoise. Within the designated protected areas, any plan or project which is likely to have a significant effect on the environment, such as the construction of offshore wind farms, must undergo a stringent environmental impact assessment before it can be carried out. In some cases, however, a plan or project must nevertheless be carried out for imperative reasons, such as overriding public interest, in spite of a negative assessment of the project’s implications for the environment. In such cases, the member state is required to adopt compensatory measures. 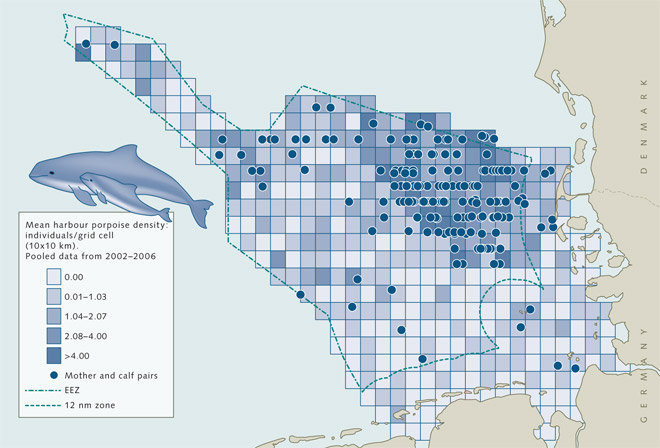 10.5 > VOff the German coast, harbour porpoises are mainly found at the northern periphery of the EEZ on the border with Denmark. As this example shows, transboundary species conservation schemes such as the EU’s Natura 2000 system are essential to preserve marine mammals. © maribus (after Gilles et al., 2009)