Common Fisheries Policy (CFP)
Further information on this topic is available here:
adopted by the European Union. The stated aim of the CFP is to help conserve fish stocks and to contribute to an economically viable and competitive fisheries and aquaculture industry. And yet, in recent years, there has been a dramatic decline in fish stocks in some cases, as well as a significant decrease in fishing industry profits.

There is one primary reason for this: every year, the European Commission makes recommendations on the Total Allowable Catch (TAC) to the Council of Ministers based on scientific evidence. The Council of Ministers, however, often disregards these recommendations because, as a rule, the priority for these ministers seems to protect jobs in the short term, not to maintain sustainability. As a consequence, the annual catch agreed to by the Council of Ministers is generally around 48 per cent more than the scientists’ recommended figure. The fact that 88 per cent of European fish stocks, measured against maximum sustainable yield (MSY), are overexploited is due in part to these excessively high catch quotas.

Furthermore, the minimum sizes of fish that may be landed are often so small that 50 per cent of the fish have no chance of ever spawning before they are caught. The minimum legally permissible mesh sizes of fishing nets also allow fish smaller than the minimum landing size to be caught. These fish – amounting to as much as 40 per cent of the catch – die as a result of capture and are generally discarded overboard. The CFP has introduced a range of regulatory instruments, such as the annual Total Allowable Catch (TAC), restrictions on the permissible number of fishing days, fleet reductions, and limits on the size and engine power of fishing vessels. Besides numerous regulations relating to fishing technology, such as minimum mesh sizes, the CFP also allows some fishing grounds to be closed. Enforcement of the regime involves monitoring and sanctions. However, in a highly diverse community like the European Union, this is fraught with difficulty, for in practice every Member State applies the regime with varying levels of efficiency. There is very little incentive for a Member State to impose stringent controls on its fishing fleet if neighbour states fishing the same waters fail to do so. A further problem is that bycatch is not recorded or sanctioned. This means that fishermen can fish above their quota and simply discard the surplus by dumping it overboard. This common practice, which is known as high grading, consistently undermines the annual fishing quotas set by the Council of Ministers.

In response to this situation, the Community Fisheries Control Agency (CFCA) was established in 2005 to organize operational coordination of fisheries control and inspection activities by the Member States and to assist them to cooperate so as to comply with the rules of the Common EU Fisheries Policy. However, there is still a lack of reliable data about catches, violations of the regime, and illegal fishing. In fact, there is some evidence that even the European Commission is reluctant to impose sanctions on Member States which violate the CFP. For example, the Commission rarely makes use of its powers, conferred upon the Commission in respect of Member States by Articles 226 and 228 of the EC Treaty, to bring matters before the European Court of Justice (ECJ) if they fail to enforce the CFP in their own country.

Furthermore, the subsidies paid to the European fishing industry create the wrong incentives. Between 2000 and 2006, some 4 billion euros were paid out in subsidies for, among other things, fleet modernization and the fish processing industry. There are also numerous regulations governing how the individual subsidies are to be used. These regulations are intended to prevent further increases in overcapacity in the fishing fleets. In total, the European Union has an estimated 2000 rules and regulations relating to the fishing industry, many of them difficult to understand and in some cases even contradictory. From a legal perspective, a further factor in the failure of the CFP is thus the lack of transparency in the measures adopted by the European Union. Due to the different interests and priorities, as well as the different election schedules in the various Member States, it is very difficult to achieve a consensus among the national ministers responsible for fisheries, who decide the annual Total Allowable Catches (TACs) in the Council of Ministers. As a consequence, measures adopted within the CFP framework generally tend to be geared toward the lowest common denominator. Given the flawed state of fisheries in the European Union, the European Union is now planning a comprehensive reform of the CFP. At present, numerous proposals are being discussed for the framing of a new CFP to be adopted in 2012. In order to ensure that the new CFP has legitimacy, the existing regional advisory bodies that bring together various interest groups – fishermen, scientists, politicians and environmental organizations – should be expanded. Admittedly, it is still too early at this stage for a conclusive assessment, but hopefully this will promote more transparency and more broad-based practical support for the CFP’s objectives. 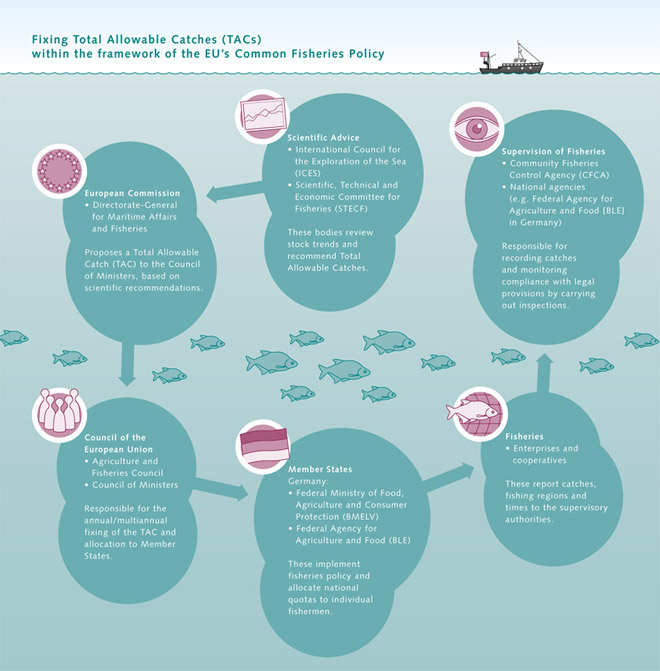