Water behaves differently from most other chemical compounds. In almost all substances the atoms and molecules move closer together as they get colder. They then solidify. Water, however, attains its greatest density at four degrees Celsius because the water molecules are packed closest together at this temperature. Many freshwater lakes have a temperature of four degrees at their deepest point because the heavy water sinks to the bottom. But surprisingly, to reach the solid ice phase, the water molecules again move farther apart. This phenomenon is referred to as the water anomaly. Ice is lighter and floats at the surface. This is seen in the large ocean regions at polar latitudes, which are partly covered by ice. The reason for this anomaly lies in the unusual properties of the water molecule (H2O). Its oxygen atom (O) and the two hydrogen atoms (H) are asymmetrically arranged. This produces a dipole, a molecule with one negatively and one positively charged end.
Depending on the temperature, these dipoles align themselves into aggregates according to their charge, for example, in the formation of an ice crystal. The dipole character of water is a critical factor for climate. Because the water dipoles tend to hold together like small magnets, water reacts sluggishly to warming or cooling. In fact, water has the highest heat capacity of all ­liquid and solid substances with the exception of ammonia. This means that water can absorb large amounts of heat before it boils. Both, the freezing and boiling points of water (zero and 100 degrees Celsius, respectively), so much a part of our daily lives, are really rather unusual. If the water molecule were symmetrical (not a dipole), then water (ice) would melt at minus 110 degrees Celsius and boil at minus 80 degrees. The inertia of climate is a result of the high heat capacity of water in the first place.
Water influences climate not only in its liquid and solid states. H2O in the form of water vapour in the atmosphere has a decisive impact on the heat budget of the Earth; water vapour alone is responsible for about two thirds of the natural greenhouse effect. In addition, it amplifies the impact of other substances on ­climate. For example, if the temperature rises as a result of higher carbon dioxide levels, then the water vapour content also ­increases because the warmer atmosphere can sustainably hold more water vapour. Because of its dipole molecule, water absorbs infrared radiation very efficiently. As a result, it approximately doubles the warming originally caused by carbon dioxide.
Another important property of water is its ability to dissolve salts, which significantly changes its density. The average salinity of the ocean is 34.7 parts per thousand (‰). At this salinity water has a greatest density of minus 3.8 degrees Celsius, which is below the freezing point of seawater with average salinity. This is, in fact, minus 1.9 degrees Celsius. So surface cooling can cause convection until ice is formed. This density trait is the engine for convection, one of the most important elements of the climate system; cold, salty water is heavy and sinks to great depths. It is replaced by water flowing in at the sea surface. 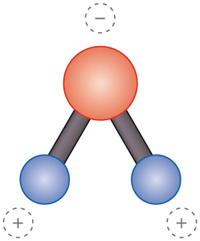 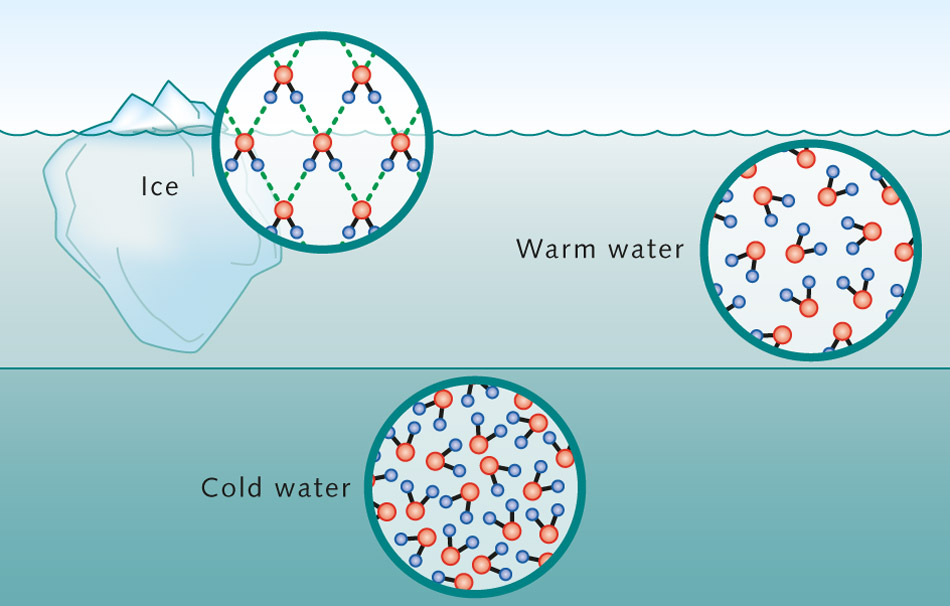 1.7 > The water molecule is asymmetrical and is therefore oppositely charged at its two ends. This is called a dipole. It thus behaves differently from other substances in many ways. Ice is less dense and floats on the surface. Freshwater has its greatest density at four degrees, and sinks to the bottom. This is then overlain by warm water. Salty water has different characteristics. Abb. 1.7: © maribus