Climate fluctuations are not unusual. In the North Atlantic Sector, for example, it is well known that the average temperatures and winds can fluctuate on decadal time scales. Climate changes caused by humans (anthropogenic) also evolve over the course of several decades. The natural decadal changes and those caused by humans are therefore superimposed upon one another. This makes it difficult to assess the impact of humans on climate with certainty. In contrast to the dynamic North Atlantic region, the effects of climate change are easier to detect in more stable regions such as the tropical Indian Ocean.

There is no doubt that the oceans drive interannual or decadal climate fluctuations. Decadal fluctuations of Atlantic hurricane activity or precipitation in the Sahel correlate remarkably well with oscillations of ocean temperature in the North Atlantic. Although the precise mechanisms behind these decadal changes are not yet fully understood, there is general agreement that variations in the Atlantic overturning circulation play an important role. This hypothesis is also supported by the fact that Atlantic sea surface temperature anomalies occur in cycles of several decades, with a pattern which is characterized by an interhemispheric dipole. When the rate of northward warm water transport increases, the surface air temperature rises in the North Atlantic and falls in the South Atlantic. If it becomes cooler in the north and warmer in the south, it is an indication of weak ocean currents. The air-temperature difference between the North and South Atlantic is therefore a measure of the overturning circulation strength.

Modern climate models can simulate the present-day climate and some historical climate fluctuations reasonably well. These models describe the climate with satisfactory reliability, especially on a ­global scale. But for smaller geographical areas the models are less reliable. It is much easier to infer the globally averaged temperature than to predict the future precipitation in Berlin. Extensive measurement series are required to better understand regional climate. For many regions of the Earth, in the Southern Ocean for example, there are long time periods in the past with only a limited number of measurements. Today data are provided in these areas by satellites.

Many mathematical models now exist that can help to understand the impacts of human activity on climate. As one aspect, they simulate climate response to external natural and anthropogenic forcing, but they also reveal how climate interacts with the biogeochemical cycles such as the carbon cycle (Chapter 2). Climate research is thus developing into a more comprehensive study of the Earth system, and today’s climate models are evolving into Earth system models. This is necessary in order to study the multiple interactions. For example, the impact of global warming on the stratospheric ozone layer can only be investigated when the chemical processes in the atmosphere are taken into account. Another example is acidification of the seawater (Chapter 2) due to uptake of anthropogenic CO2 by the ocean.

No one has yet been able to predict how the warming and acidification of the ocean will influence its future uptake of anthropogenic carbon dioxide, upon which the carbon dioxide levels in the atmosphere and thus the future temperature change depend. There is a mutual interaction between the ocean and the atmosphere. To a large extent the ocean determines the intensity of climate change, and its regional expression in particular. On average, warming is taking place globally. But individual regions, such as the area of the Gulf Stream, may behave in different ways. On the other hand, the ocean itself reacts to climate change. Understanding this complex interplay is a task that will take years to accomplish 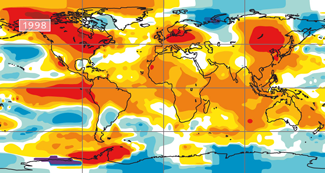 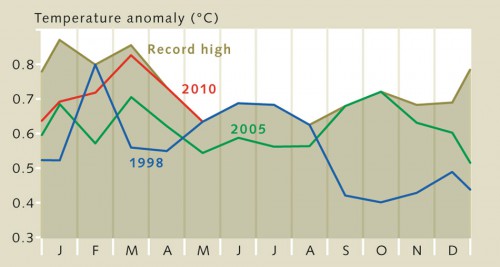 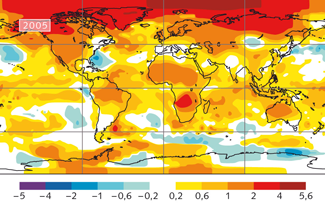 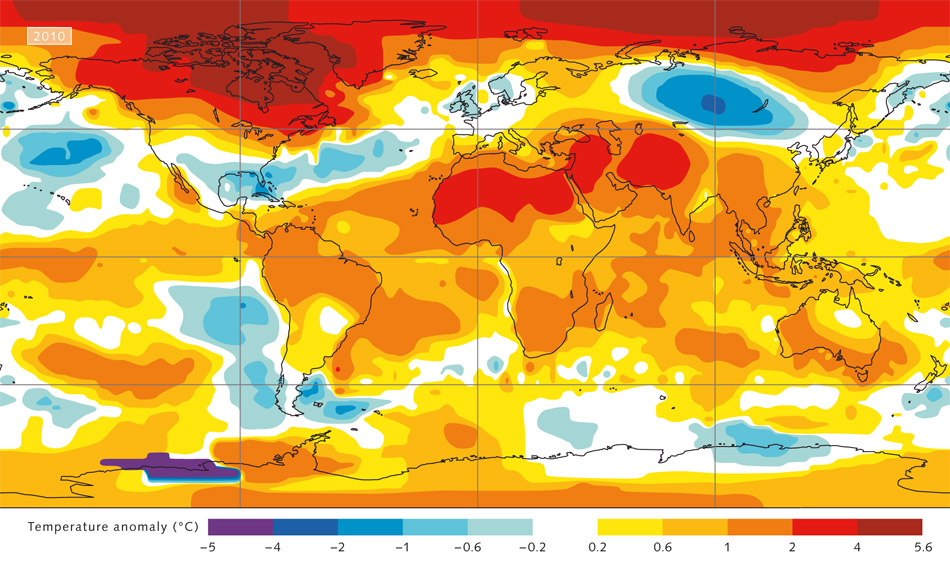 1.3 > Europe experienced an unusually cold beginning of the year 2010. But from a global perspective, the winter of 2010 was the third warmest in the past 131 years. If the first five months of the year are considered, then 2010 is actually the warmest, and it even reached the previous temperature record highs for the months of April and May (top). The years 1998 and 2005 have been so far the two warmest years in the annual mean (relative to the average of 1951 to 1980). © maribus (after NASA Goddard Institute For Space Studies)